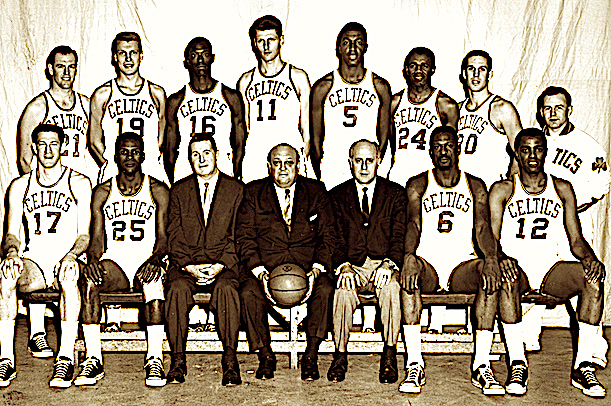 Presidential hopeful Mike Bloomberg took time out his busy day apologizing for wanting to throw Blacks ‘up against the wall‘ to do a revealing interview with the Jewish Telegraphic Agency in which he described his ideal vision of ‘equality’ in America:

And since I grew up in Boston, Red Auerbach was an icon, too. Red is famous for what he did to build one of the great basketball dynasties ever in the Celtics. He was Jewish in a largely Catholic city, but it didn’t matter — most people don’t think of him as a Jewish leader. He was just a leader. And he was the first NBA coach in history to put in an all-black starting five. Because he realized, before we are anything else, we are all humans and all equal. As one of the only Jewish kids in an elementary school just outside Boston at that time, his success showed anything was possible, and his commitment to equality was something my parents shared.

And even more significant for that 1963-64 Boston Celtics team, that night the entire bench was all White players.  That, my dear Americans, is the jewish vision of ‘equality’ for your future: Blacks on the court in front of the cameras with Whites sitting on the bench.

And lying Red Auerbach even had the chutzpah to claim at the time that he didn’t even realize that he’d put an all-Black starting five on the court until reporters pointed it out to him after the game.

Sure, Red, you had no idea what you were doing; you just were doing what was ‘best for the team’ to win.

Of course, Auerbach waited until White Hall of Famer, Bob Cousy, retired the previous season before he dared pull this stunt.

And one of the White players who ‘wasn’t good enough’ to start that night was a future Hall of Famer who was also named one of the 50 best players in NBA history, John Havlicek, the team’s second leading scorer that year behind Bill Russell.

Oh, and another of the White players who just couldn’t break into the starting five that night was another future Hall of Famer, Tom Heinsohn.

So when Mike Bloomberg talks about ‘equality’ for all Americans, what he really means is that even the most talented White people are going to be ‘sitting on the bench’ so that less talented Blacks can be promoted for the sake of impossible equality.

No, ‘moderate’ Mike Bloomberg isn’t really all that different from Bolshevik Bernie Sanders.