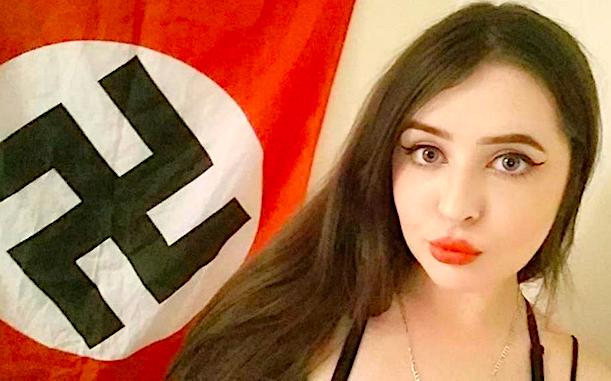 Four “diehard” National Action members, including a ‘Miss Hitler’ beauty pageant contestant, have been sentenced to prison on Tuesday after a two-day hearing at Birmingham Crown Court, which found their sense humor and political opinions to be forms of ‘domestic terrorism’:

Alice Cutter, who became known as a contestant in the ‘Miss Hitler’ beauty pageant, was sentenced to three years in prison, while her former partner Mark Jones received five and a half years.

Co-accused Garry Jack was sentenced to four and a half years, and Connor Scothern was detained for eighteen months.

All four were found guilty of membership in a terrorist organisation.

Ms Cutter, 23, was described by prosecuting barrister Barnaby Jameson as an “active member” of National Action at Monday’s hearing.

National Action was proscribed as a terrorist organisation in December 2016, after a series of incidents including the praising of the murdered of Labour MP Jo Cox.

Ms Cutter, who had participated in the Miss Hitler beauty pageant as Miss Buchenwald, had initial denied membership of National Action until footage emerged showing her standing with other members giving a Nazi salute behind a banner that read “Hitler Was Right”.

On Monday, jurors were shown messages in which Ms Cutter had joked about using a Jew’s head as a football and gassing synagogues.

The court also heard that Ms Cutter had made an unsuccessful attempt to recruit a 15-year-old girl, in what Mr Jameson described as a targeted recruitment “pattern” by Ms Cutter and her then boyfriend Mark Jones.

Jones, 25, a former organiser for National Action’s London branch, accepted having delivered a Nazi salute and holding a National Action flag in the execution room at Buchenwald in 2016.

Mr Jameson said that after National Action’s proscription, Jones produced propaganda for two splinter groups – NS131 and Scottish Dawn – both of which have since been banned.

Garry Jack, 24, described as an “active and committed member” of National Action, had previously been given a suspended jail term for racially-aggravating placing stickers in Aston University, while Connor Scothern, 19, was described by another leading member of National Action as having “driven himself into poverty” travelling to meetings and printing 1,500 stickers calling for a new ‘Final Solution’.

Director of public prosecutions, Max Hill QC, told Radio 4 on Monday: “They are diehards in the way they think.”

Mr Hill continued: “They hark back to the days of not just antisemitism, but of the Holocaust, the Third Reich in Germany, and they take their mindset from those extreme Nazi groups and latterly neo-Nazi groups in Germany.”

So these people didn’t actually hurt or harm anyone — they are being thrown in prison for “wrong think” not shared by the overlords who now rule England with an iron fist of political correctness.

Jews, of course, are free to have Holocaust-themed beauty pageants, but when anyone else does it, they go to prison.

And they are free to openly discriminate against other Jews who don’t happen to look as White as they are — because jail is reserved for only non-Jewish antisemites.

Ironically, Jews brag about their great sense of humor — but when it comes to themselves, Jew are apparently so humorless, that if you, as a non-Jew, dare to poke fun at them, you could find your life ruined and future destroyed, or in prison, literally.

The diversity hall monitors in Australia have even gone so far as to declare that sarcasm is a form of “violence”.

So, yes — telling jokes that Jews find offensive is now considered a form of ‘domestic terrorism‘ in Merry Old England.

Let that sink in.