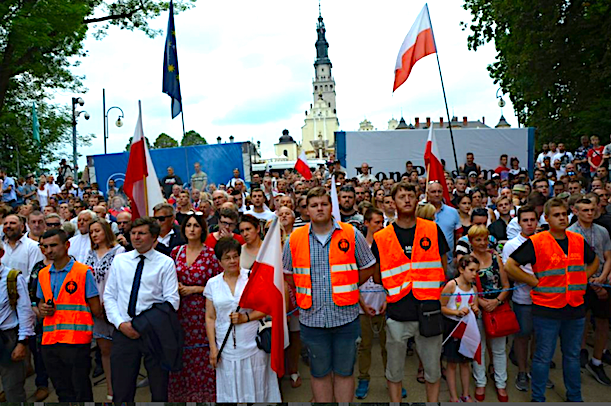 Hundreds of Polish Catholics blocked the street to their nation’s holiest shrine as an LGBT march approached a children’s rosary procession:

The 20th Pilgrimage of the Children’s Backyard Rosary Circles (“XX Pielgrzymka Podwórkowych Kół Różańcowych Dzieci”) to the Shrine of Jasna Góra in Częstochowa took place without incident, thanks to police and hundreds of adults who separated the devotional event from the famous city’s second LGBT “Pride March.”

According to Polish website Polonia Christiana, there were fears that the pro-homosexual demonstration would invade the sanctuary of Jasna Góra, where the icon of the Black Madonna of Częstochowa is housed. A group calling itself the Men’s Defence of Jasna Góra (Męska Obrona Jasnej Góry) was one among other groups standing bodily in the paths to the shrine while police lined the marchers’ official route, keeping them far from the children’s event.

Polonia Christiana reported that the ordinary of Częstochowa, Archbishop Wacław Depo, had judged the city’s second LGBT parade to be a “deliberate provocation aimed at the children in the whole of Catholic Poland.”

The website also mentioned that the LGBT marchers profaned the image of Our Lady of Częstochowa by depicting her with a rainbow for a halo and also carried banners combining the national symbol of the eagle with the “pride” flag.

On Sunday afternoon, Radio Maryja, one of Poland’s most prominent media organizations, thanked the Catholics who guarded the shrine over Twitter, saying, “We thank all the national, patriotic[,] and religious groups for their powerful defence of Jasna Góra.”

According to Radio Maryja affiliate Nasz Dziennik (“Our Daily”) there will be services of reparation across Poland on Sunday, June 23, 2019 because of the profane use of the image of Our Lady of Częstochowa by LGBT activists.

Nasz Dziennik reported today that Archbishop Gądecki, the Chairman of the Polish Episcopal Conference, observed that the incidences of profanation have increased thanks to the LGBT Pride or “Equality” March.

“The official reason for organizing [these] marches is concern for greater tolerance in society, “ he said. “Meanwhile they become a place of obscene displays as well as an opportunity to show contempt for Christianity, including parodies of liturgy of the Eucharist, and to incite hatred towards the Church and clergy.”

Last month an LBGT activist was arrested in connection with the Easter weekend appearance of the adulterated “rainbow” Black Madonna of Częstochowa on public toilets and trash cans near a Catholic church in the central Polish city of Płock. Offending religious sensibilities is a crime in Poland, and there are few more potent symbols in Poland of the Catholic faith than the icon of Our Lady of Częstochowa.

Regardless of what one may think of the specifics of Catholic pageantry and rituals, this public confrontation between Christians and homosexuals is a microcosm of what is happening in our White western societies at large.  The jewish-backed sodomites have become emboldened and now  aggressively promote their agenda, which includes their “right” to have unhindered access to our children to indoctrinate them into this perverse and destructive “lifestyle”.  And while Christians in western Europe have been cowered by the LGBT agenda and allowed them into their schools and children’s organizations, countries like Poland are standing up to them and refuse to be shamed for their “intolerance”.

We have seen so-called Christian denominations in places like Sweden, Germany, and England openly embrace sodomites, and even sanctioning their “marriages” in their churches.  And without a Christian prohibition against homosexuals, there is no way to morally justify protecting our children from their rapacious clutches.  An atheistic or pagan society can offer no moral justification for a prohibition against homosexuals.  And regardless of how the Catholic Church is dealing with the issue of sodomy and pedophilia within its ranks, the vast majority of Catholics are firmly against the LGBT agenda, and will continue to publicly stand up against these public displays of perversion in front of our children.