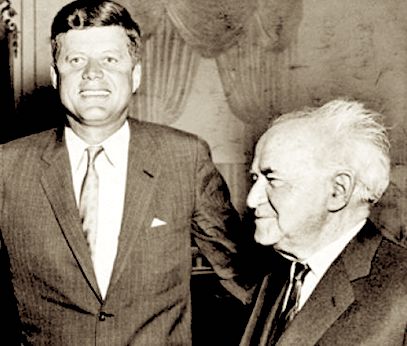 Declassified documents show President John Kennedy in 1963 warned Israeli Prime Minister Levi Eshkol that U.S. support for the young country would be “seriously jeopardized” if Israel did not allow the United States periodic inspections of Israel’s nuclear reactor to make sure Israel was not manufacturing weapons-grade nuclear material:

A telegram from Kennedy dated July 4, 1963, congratulates Eshkol on assuming the prime ministership after Ben Gurion’s resignation and recounts talks between Kennedy and Ben Gurion about inspections at the reactor in Dimona.

“As I wrote Mr. Ben Gurion, this government’s commitment to and support of Israel could be seriously jeopardized if it should be thought that we were unable to obtain reliable information on a subject as vital to peace as Israel’s effort in the nuclear field,” the telegram said.

The telegram was declassified in the 1990s but was not widely available until last week when the National Security Archives, a project affiliated with George Washington University, posted it on its website.

Kennedy who was otherwise close to Israel was furious with its ostensible nuclear weapons program, fearing that the Soviet Union could use it as leverage to maintain its influence in the Middle East.

Eshkol, caught off guard by the tone of the telegram, took seven weeks to assent, and the twice-yearly inspections continued until 1969 when President Richard Nixon ended them.

Also revealed in the trove of documents the NSA posted is the origin of Israel’s oft-repeated credo that it would not be the first to introduce nuclear weapons — a deliberately ambiguous statement that left Israel room to develop the weapons, but not arm them.

Shimon Peres, then the deputy defense minister who later would lead the country as prime minister for two stints and then become president, improvised the statement when he was surprised by Kennedy during a meeting Peres had scheduled with Kennedy’s adviser, Myer Feldman, who also functioned as the administration’s liaison to Israel and the U.S. Jewish community. Unbeknownst to Peres, Kennedy and Feldman had planned the “surprise” encounter.

According to a Hebrew-language Foreign Ministry of Israel account of the April 2 meeting, Kennedy asked Peres into the Oval Office for 30 minutes and questioned him on Israel’s nuclear capacity.

“You know that we follow very closely the discovery of any nuclear development in the region,” Kennedy said. “This could create a very dangerous situation. For this reason, we monitor your nuclear effort. What could you tell me about this?”

Peres improvised, “I can tell you most clearly that we will not introduce nuclear weapons to the region, and certainly we will not be the first.”

The whole point of the creation of nuclear weapons under the Manhattan Project was to destroy the “evil” Nazis who threatened the Rothschild economic stranglehold over Europe.

Luckily for all Europeans, the Germans were defeated before the Jews could get their hands on any nukes, because Germany was the primary target for “the bomb”, not Japan, which had been making diplomatic overtures of surrender in early 1945..

So it was only natural that the Jews were going to arm their new State of Israel — just as they armed their co-ethnics in Soviet Russia, with nukes to keep the rest of the world in line.

The ever-naive Kennedy actually believed that he could tell the Jews that they would never have nuclear weapons as long as he was President.

And despite his suspicions, he had no choice but to hire Myron Feldman, who acted as an Israeli spy in the White House, betraying JFK’s confidence to the Israelis.

He should have known that the Jews would never accept a situation where they could not only defend themselves, but also threaten to destroy the entire planet if anyone seriously threatened the Jews, and that included their American “allies”, as the Kennedy family discovered not just once, but a number of times.

And so this article serves as a “subtle” reminder to any world leaders today not the mess with Israel.