More Than 50% of Members In Satanic Temple Are LGBT Sodomites 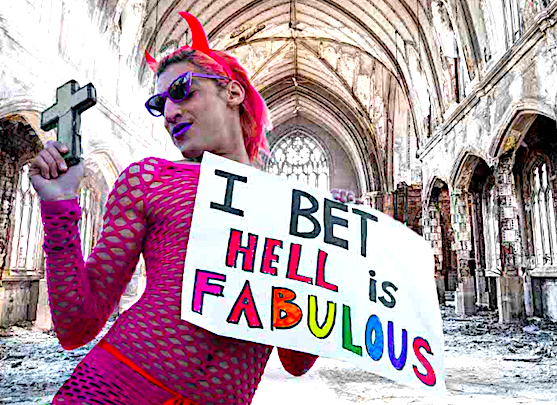 In an interview with the British magazine Attitude, Lucien Greaves, the co-founder of The Satanic Temple in the United States, admits that “more than 50% of our membership is LGBTQ,” and that is a “conservative estimate”:

Attitude is a best-selling gay magazine, founded in 1994. The Satanic Temple was founded in 2013 and it promotes a secular humanist agenda. The Temple, based in Salem, Mass., denies that there is an actual Satan and it claims that it does not worship the Devil.

“It would be a conservative estimate to say that more than 50 per cent of our membership is LGBTQ,” Greaves told Attitude. “I think that’s because they feel disowned and disenfranchised from the traditional religious institutions.”

“So, you have a population willing to embrace a religious identification that is boldly willing to speak out to the contrary,” he said.

“Within the Satanic Temple, we’re all pretty much one and the same,” said Greaves. “We’re all Satanists and it’s not like we have ‘tolerance’ for trans people or gay people or sex workers — we just don’t f***ing care, and a lot of people in those communities appreciate that.”

Greaves, a pseudonym he uses reportedly to protect his family from death threats, went on to say that The Satanic Temple often participates in LGBT Pride parades and supports LGBT initiatives.

“Our chapters are always involved with Pride parades in the United States, they’re always doing something for the LGBTQ community and they’re always open about inclusion,” Greaves told Attitude.

He further said that The Satanic Temple supports abortion, as well as the gay agenda, and will fight attempts to roll back Roe v. Wade or laws that affect homosexuals.

“We will always fight them,” he said. “We will fight them to the death to ensure that there are equal rights for the gay community.”

Since all homosexuals are in active rebellion against God’s Will, it should come as no surprise to anyone, including themselves, that they would naturally gravitate to “satanism” which is merely a rejection of the Divine Order.  And that Order has become so inverted today that the LGBT community is now held up as the paragon of virtue and “family values” while Christians are scorned as “intolerant,” “judgmental,” and even worst of all, “prejudiced”.

Of course when LGBT people are “intolerant” of Christians, that’s a good thing.  But if they truly embraced the ethos of this satanic temple, LGBTers wouldn’t care one way or another about what Christians think of them, but to do so wouldn’t allow them to virtue signal and take the “moral” high ground and make “martyrs” of themselves.  This kind of hypocrisy allows homosexuals to pretend to care about abortion rights even though they have no need for abortions, but it keeps them “relevant” and “edgy”.