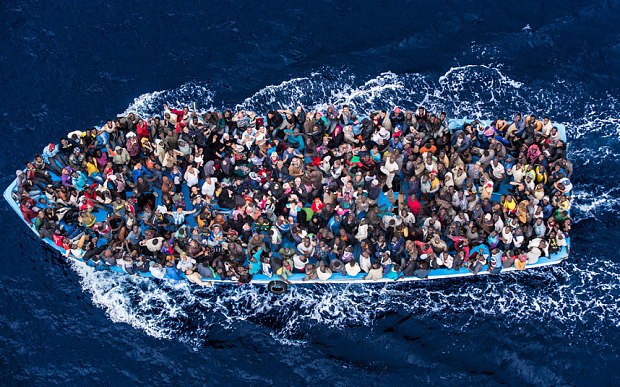 A Moroccan woman has been shot and killed by the Moroccan Navy while trying to cross the Mediterranean and illegally invade Europe:

A Moroccan woman killed after the North African kingdom’s navy opened fire on a boat carrying her and two dozen other migrants was buried on Wednesday, a day after she was shot.

The victim, who had been studying law, died before reaching a hospital, said Mohamed Benaissa, the head of Morocco’s Northern Observatory for Human Rights. Three other migrants were wounded in Tuesday’s confrontation, he said.

Some Moroccan media profiling her on the day of her burial in the northern city of Tetouan showed pictures of her identity card which said she was 19. She had earlier been reported to be 22. There was no immediate explanation for the age discrepancy.

The Spanish Foreign Ministry confirmed that two of its nationals had been arrested by Moroccan authorities, one of them with a criminal record. The official declined to elaborate on the criminal record, according to the official who spoke on condition of anonymity because he wasn’t authorized to speak publicly. Spain’s Europa Press, a private news agency, said the Spaniard had been charged twice and detained at least 16 times for violence against women and other unspecified crimes.

It was the second time in recent days that Morocco’s Royal Navy intervened to stop a boat suspected of carrying migrants across the Mediterranean, and comes amid growing concerns about migrant trafficking in the western Mediterranean region. The central Mediterranean route, mainly between Libya and Italy, is being choked off by the Libyan coast guard chasing after smugglers’ small boats and returning migrants to Libya.

So Morocco has the political will to do what Europe has failed to do in the most simple and straight forward way — shoot the illegal invaders on sight.  Instead of spending millions on “educating” Africans, give the Moroccan Navy $10,000 per invader casualty.  The flood of invaders would stop after only a couple are killed.  Problem solved with a minimum of expense and bloodshed.

Blood must be spilled either way — either in the boats before they get to Europe, or eventually on the streets of Europe in open civil warfare.  Morocco has shown Europe the most practical way of handling this problem, and no one can accuse them of “racism” or “xenophobia”.

Let’s use Morocco as a proxy to do the work that we don’t have the political will to carry out ourselves.