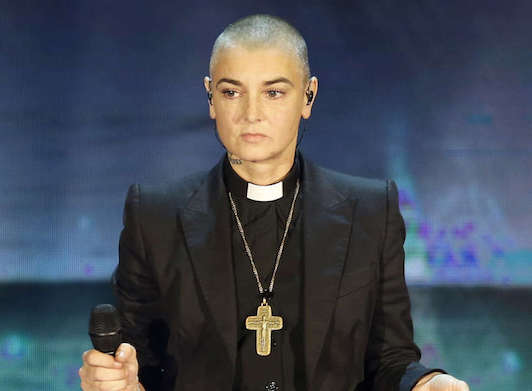 With her long person history of mental and emotional disorders, it should come as no surprise to anyone that Sinead O’Connor’s recent conversion to Islam has apparently caused her to hate herself and other White people:

Recent Islamic convert Sinead O’Connor, who now goes by the name “Shuhada Davitt”, in a recent tweet declared that “truly I never wanna spend time with white people again (if that’s what non-muslims are called). Not for one moment, for any reason. They are disgusting.”

The Irish singer has had a history of mental illness and had at least one suicide attempt in the last year by her own admission, being admitted into a mental hospital soon after.

The singer, a self-identified feminist, only recently publicly announced her conversion to Islam, and now wears a hijab.

In her most recent flurry of tweets, she says she can no longer spend time with “non-Muslims”, claiming they are “disgusting”.

Perhaps Sinead has been following musician, Bono, who has also come out as a White-hating celebrity, using his concerts as a revue to spout his hatred against the people who are responsible for his wealth and fame.  Either way, if Sinead had said that she finds non-Muslim Jews or Blacks disgusting, her career or what’s left of it would be over, but it is tacitly understood by everyone in the public eye that hatred of anything White — especially White men — is not only acceptable, it has become expected.

Of course, if the U.K. police were truly doing their job, they’d be knocking on Sinead’s door to investigate her for “inciting racial hatred,” as there can be no doubt that her fellow Muslims will be emboldened to declare jihad on non-Muslim Whites in England, which could lead to an all-out race war.  But then again, only Whites can incite “hate”, but now that Sincead is Muslim, she is apparently no longer White, or at least in her own mind.