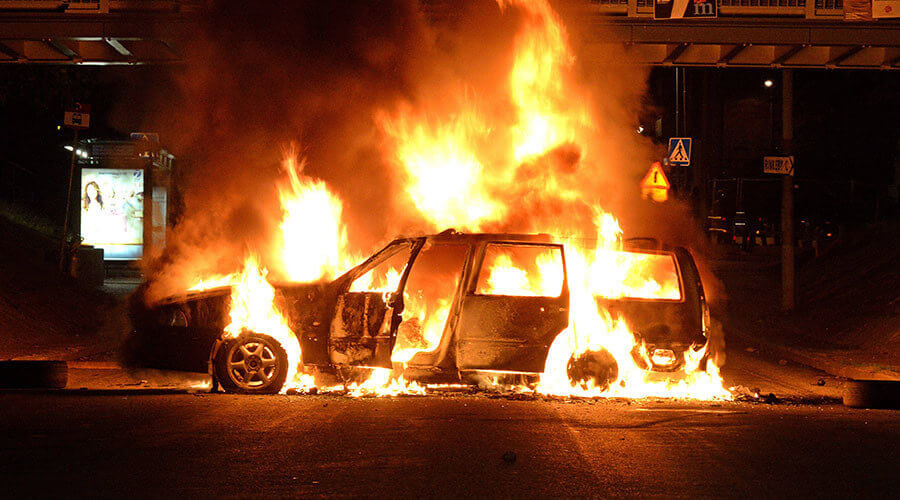 It appears Muslims have a different way of expressing their appreciation for open passage into Sweden – and it certainly isn’t peaceful:

Swedish police have described the arson attacks on cars as “organized and prepared.” They come amid growing concern over violence, which could benefit Sweden’s anti-immigration Social Democrats in the upcoming election.

Groups of youths in Sweden set fire to dozens of cars in the city of Gothenburg and surrounding towns on Monday, in what Prime Minister Stefan Lofven described as “extremely organized” attacks.

Police said up to 100 cars were burned or damaged in Gothenburg, Sweden’s second-biggest city, as well as in Trollhattan, an industrial area with high unemployment, and Falkenberg. A number of cars were also burned overnight in Stockholm.

Police did not say what might have motivated the “organized and prepared” attacks, only confirming that gangs of youths were involved without specifying numbers.

Witnesses told police the alleged offenders were dressed in dark clothing and hoodies.

“It seems very organized, almost like a military operation,” Lofven said in an interview on Swedish radio, but did not say who might have been behind the attacks.

“Society is always going to react strongly to this kind of thing,” he said.

…In addition to escalated violence, voters are worried about a struggling welfare system, declining school results and the effects of immigration, which saw around 160,000 people seek asylum in Sweden in 2015.

The police killing of a 69-year-old man who wielded a machete in a suburb of Stockholm, prompted accusations of police brutality in 2013 and saw rioting by hundreds of youths in the capital.

Of course, all the media cares about is that this wave of migrant violence will create political power for the “Far Right”.

The Swedes can be shocked and indignant all they want about these arson attacks, but in reality, because they were carried out by Muslims and Africans, they will do nothing about it for fear of being called racists. After all, if these migrants had more “opportunitiy” and more “social welfare”, and more “education”, and more “integration” programs, none of this would be happening. It’s the Swedes’ fault for not doing enough for these migrants.

As we’ve seen in France, the Arab and African invaders love to randomly burn cars for some reason–it’s obviously part of their “vibrant” cultures, and perhaps Sweden needs to merely adjust to this new social norm. After all, getting too upset over a few burned cars might possibly derail their utopian dream of a multi-racial Sweden, and we can’t have that.

Blame it on Global Warming and go on with your lives.