Muslim Invader Movement Claims Sweden And Everything In It As Theirs 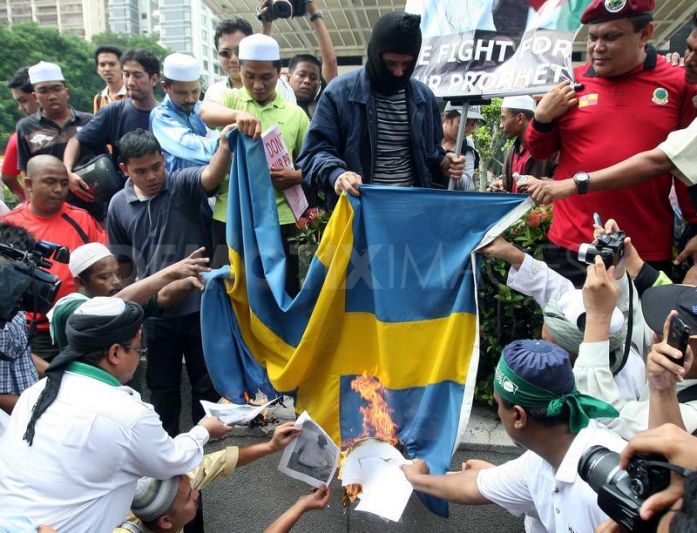 Muslim migrants have formed a “Resistance” group to counter the recent success of the anti-migrant party, and now claim that the cities and entire country are theirs:

This past weekend, hundreds of participants gathered for the first “Resistance” demonstration in Sweden’s most multicultural city. Despite Sweden constantly ranking among the most “migrant-friendly” nations, the members of the “Resistance” claim that their very existence in Sweden is being questioned.

In the aftermath of the general election, immigrants in Sweden’s third-largest city Malmö have started a group called “Welcome to the Resistance” in a bid to stop “everyday racism” and, by their own admission, secure their existence.

The group is not affiliated with any party or organization, instead embracing first and second-generation immigrants and refugees living in Malmö and who claim to have suffered firsthand from racism.

On Sunday, the first “Resistance” demonstration gathered several hundred participants. One of the slogans, according to the local Sydsvenskan daily, was “Strike Hard, Wogs! The City, the Country, Everything Is Ours.” Another motto shouted during the demonstration was “Entire Malmö Hates Racists.” During the demonstration, a banner saying “No one but us” was also spotted.

“We felt that we need our own voice. During the election movement, everybody kept talking about people who look like us,” Miriam Negash told Sydsvenskan. “We are many here in Malmö, over 30 percent. We will not have to walk the streets in fear,” she added.

On its Facebook page, the “Resistance” movement published a manifesto claiming that the very existence has been questioned during the election campaign, adding that it was “not about shirt-clad Nazis,” but about “most parliamentary parties and the public service.”

“We choose to build our own movement, one where we fight back, and don’t let ourselves be pushed around, where we show civic courage, where we stand up for each other. We are immigrants, second-generation immigrants, adoptees and those who are being racified,” the manifesto, which is also available in Farsi, said.

It seems that these radical Muslims have learned well from their jewish overlords and taken entire pages out of their playbook, calling anyone who opposes them “Nazis”.  After all, only a “Nazi’ would oppose having their country over-run by dirty Arabs who burn down the city when they don’t get what they want.  Only a “Nazi” would want to preserve a 2,000 year old Swedish culture for their posterity.

Most Swedes are self-identified atheists.  In fact, Sweden has the highest per capita number of atheists in Europe — and it’s no coincidence that they may also become the first White country to completely lose its Christian and cultural heritage to hostile Islam and its Arab hordes.

When you choose the atheists of the EU to rule over you, ultimately you will serve the Jews, and they will gladly decide your fate for you — which will be oblivion in a racial “melting pot”.