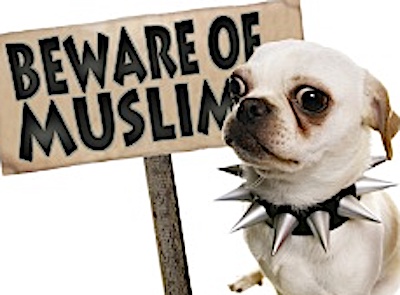 As Muslims continue to invade traditionally White Christian countries, they have begun to make increasingly vocal demands to accommodate their supertitious “cultural norms,” including their irrational aversion to our pet dogs:

In one of his latest reports, John Zmirak, a social and business writer, as well as a senior editor at The Stream, has cited a number of flyers that were circulated in Hoffman Park in Vancouver, asking dog owners to keep their “filthy” pets on leashes due to “Many Muslims living in the area”.

“Please keep your dogs on a leash and away from the Muslims who live in this community”, CTV Vancouver quoted the flyers as reading back in 2017. Mayor John Becker then notably came up with a vague reaction: while arguing that the notices had not been produced by the city, he said that there were “current bylaws in place that enforce areas for dogs to be on leash, except in designated off-leash areas”.

Zmirak went still further, citing another “weird, hyper-polite anomaly”, as Muslim politicians in the Netherlands, which has also seen a vast influx of immigrants over the past few years, had attempted to ban dogs from The Hague, the third biggest city in the country. In Spain, the author went on, local politicians managed to reject such a ban; however, by a twist of fate, a dog-poisoning spree followed closely.

In Britain, meanwhile, the situation is not much different, and perhaps even more glaring as Zmirak cited an earlier report by the Gatestone Institute that branded the UK as “ground zero” for Europe’s canine controversies, as blind passengers “are being ordered off buses or refused taxi rides because Muslim drivers or passengers object to their ‘unclean’ guide dogs”.

The author called out the controversies as a suggestive “sign of the times”, with the notices in “the Canadian dog park” telling the public much of “what we’d rather not think about”. “That kind of sign notifies you when your country has been colonised”, Zmirak stated resolutely,

The Muslims would never have the temerity to make these ridiculous demands unless they knew there were very powerful forces behind them to run interference for them and protect them from the inevitable backlash.  And if you haven’t figured out who is aiding and abetting this Muslim invasion, you need to wake up from your sports/porn coma before it’s too late.  The Muslims and their jewish enablers have announced their common cause against White Christian “racist” America, in case you haven’t noticed, and this is just the beginning.

White Christendom saw a Muslim invasion of Europe in the early 17th century, and thanks to the Poles, the invaders were defeated and expelled, but today there is virtually no resistance to this new and much larger invasion.  What accounts for this difference?  Europeans have largely abandoned their Christian faith that for over 1,000 years protected them from the machinations and subversion of the Jews and their proxy warriors, the Muslims.

After WWII, every Christian household signed its own death warrant when they put televisions in their living rooms and abdicated their parental responsibility to that one-eyed jewish babysitter which told their children Black is White, up is down, wrong is right, and to resist is “hate”.