Muslim Migrants in Sweden Behind Epidemic of Cat Maimings and Torture 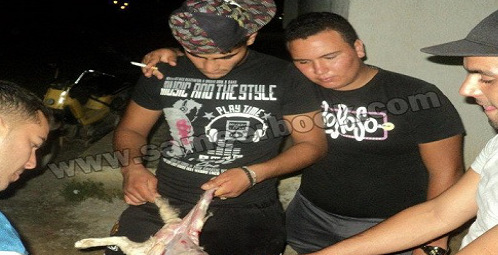 Cats are the the most popular and loved household pet in Sweden, which makes the recent “epidemic” of maimings and mutilations even more disturbing:

The peaceful and pet-loving Scandinavian country has been hit by a wave of attacks against cats; the unfortunate felines were brutally mutilated and had to be put down.

Cat owners across Sweden have been taking steps to ensure their pets’ security amid an upsurge of animal brutality.

“Someone here is out to hurt animals. I do not know how to keep my animals safe,” Marie-Louise Davidsson, a troubled cat owner from Stockholm, told the Expressen newspaper.

Earlier, Davidsson had to take the heart-wrenching decision to euthanise Alibaba the cat, who returned home from a walk brutally maimed. According to Davidsson, Alibaba’s tail was fleeced, the fur and skin completely removed. The injury left the pet in so much agony that Davidsson had no other choice.

By her own admission, Alibaba was free to run in and out of the home, as were her three other cats. Now she is afraid to let her pets out of the apartment area.

“I cannot understand how there is someone who can do this sort of thing to a poor innocent animal in this way,” Davidsson said.

Her Facebook post sparked strong reactions among cat-loving Swedes; condolences to Davidsson and curses against the animal tormentors poured in. The culprits were called “perverts,” “sickos” and “evil idiots,” among other things.

In the post’s comments section, cat owners shared stories of their pets suffering similar torture, sharing pictures of their mutilated pets. Recently, cats from other regions of Sweden were reported to have been subjected to these kinds of attacks. Earlier this week, a cat in Dalarna had to be euthanised after it got its tail and feet chopped off in what veterinarians called an act of animal abuse.

According to the animal insurance company Agria, there are about 1.4 million cats in Sweden, a nation of 10 million people. Cats are the most popular pet, outnumbering dogs, rabbits, birds, hamsters and mice. In total, 34 percent of Swedish families have pets.

This Swedish woman cannot understand who would do such a thing to cats because the political correctness which dominates Sweden won’t allow her to even acknowledge that it’s Muslims doing it.  The entire article avoids the obvious — that this problem materialized during the Muslim invasion of Sweden.  Arabs and Africans do not treat animals the same way White people do, nor do they treat other people the way we do, so it’s foolish to expect them to respect something defenseless as a household pet, which they see as either lunch or something to torture for fun.

Animal cruelty has swept across Europe along with the migrants, but the media rarely reports on it, of course, but even more pathetic is that these Swedes are more outraged by these cats being tortured than they are about Swedish women and children being gang raped and murdered by these Muslim animals.  Accepting these migrants in the first place is proof that the Swedes themselves are sado-masochistic, and what’s happening to these cats is what’s happening to their society as a whole.