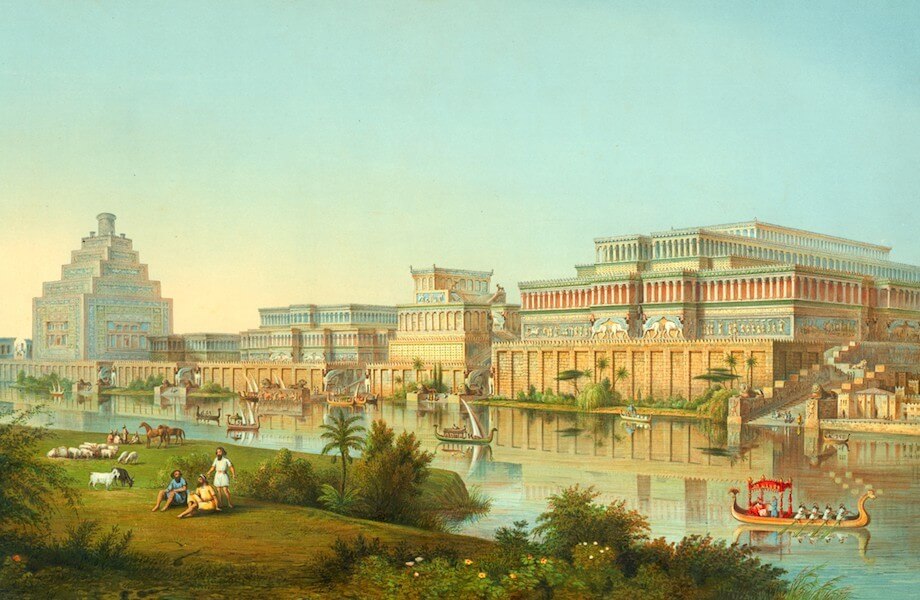 “The scale of the damage done by Islamic State militants to the ancient city of Nimrud is beginning to emerge, two days after it was retaken by Iraqi forces.

Much of the area lies in rubble, with shattered statues and a ziggurat reduced to a fraction of its size.

IS circulated video footage showing militants blowing up or smashing up monuments and artefacts last year.

Government forces recaptured Nimrud as part of a wider assault on Mosul, the last major IS stronghold in Iraq.”

From the 1840s to 1850s, the site of Nimrud, in modern-day Iraq, was excavated under English archaeologist Austen Henry Layard. Underneath the sand was discovered a grand city, the political center of an empire which dominated the ancient Middle East.

Nimrud is the site of the ancient Assyrian city of Calah (Akkadian: Kalhu) near the Tigris River. During the Neo-Assyrian period (911-605 BC), it served as an early capital and main residence city of the king of the Assyrian Empire. Within the city lay the great palaces of King Ashurnasirpal II and King Shalmaneser III along with several temples dedicated to various gods of the Mesopotamian pantheon.

The populous and splendorous city of Calah gave testament to the grandiose and militaristic nature of the Assyrians and their kings about three thousand years ago. The city remained as the main royal residence until the court was officially moved by King Sennacherib (705-681 BC) to the city of Nineveh, which lay just to the north. Calah remained an important center until the fall of the Assyrian Empire in the seventh century BC.

The discovery of the site of Calah, in Nimrud, remains one of the most significant findings in the history of Ancient Near Eastern archaeology. Although, there are others who do not share this sentiment.

In 2015, muslim jihadists of the Islamic State in Iraq began systematically destroying ancient sites and artifacts. The museum in Mosul was raided and the specific targets for defacement and destruction were ancient Mesopotamian artifacts. Across Iraq, several ancient Assyrian sites, notably the sites of Nineveh, Dur-Sharrukin, and Hatra, were being demolished.

It appears that a particular target for demolition was the site of Nimrud, wherein the muslims were reported to have begun bulldozing many ancient buildings and defacing many statues and monuments. The remains of the grand palace and the imposing ziggurat were crushed under heavy machinery (explosives were also employed). Though the dismantling was not complete, the damage to the original buildings leaves them almost unrecognizable and irreparable.

The jihadists justified their deliberate destruction of Assyrian culture by claiming that the sites were blasphemous and contrary to Islamic belief. This is the explanation for their desolation of cities which were built over a thousand years before the birth of their prophet and the Arab invasions.

Contrary to common belief, the people occupying modern-day Iraq do not constitute the original  populations of ancient Assyria and Babylon. The Arabs with their religion invaded and spread throughout the Middle East during the seventh century AD. They do not respect ancient Assyrian culture because it is admittedly not a part of their heritage. Indeed, the Middle East was a very different place in ancient times, in contrast to more recent history.

This is what they will do with the presence of cultures which do not fit their “beliefs,” no matter how ancient. The Assyrians had formerly ruled the Near East a thousand years before the muslims claimed dominance, and since then their culture has been treated as though it was foreign by muslims today.

The muslims occupied the Middle East over a thousand years ago and now they are beginning their true infiltration into Western Europe. The destruction of these ancient Assyrian cities should be a warning to all countries wishing to give these people refuge. They do not respect your culture, and they most certainly do not respect your religion.