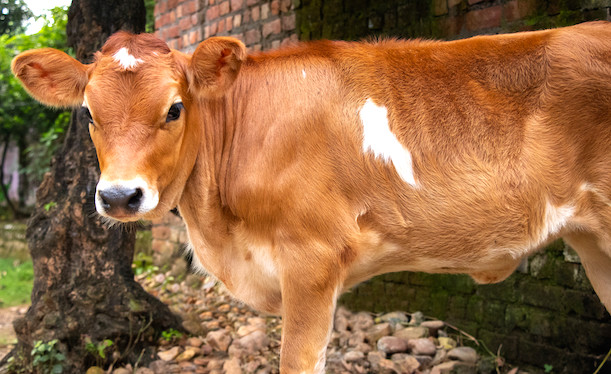 Muslims who work at a halal butcher shop in Bloomfield, Connecticut chased down a cow that had escaped from their premises and butchered it in the parking lot of the Home Depot next door:

A young cow was slaughtered in a Home Depot parking lot in public view, and NBC Connecticut Investigates has learned the business that owned the livestock is closed, and in hot water with multiple local, state and federal agencies.

This involved the Saba meat store in Bloomfield, which had multiple live animals on its premises, and advertises it prepares its products observing all Islamic laws.

Officers said Saturday a young cow at the Saba meat store got loose and ran across the street to Home Depot, followed by Saba employee Badr Musaed and Andy Morrison, a contractor doing renovation work there armed with a bow and arrow.

The officer observed the wild pursuit of the cow, even trying to help box it in with his police cruiser.

Then the police report said, “…as the cow ran towards the employees Morrison shot at the cow however he missed and the arrow struck the wall of the Home Depot.”

You could actually see someone shoot the bow and arrow from a distance on the video.

Moments later, in the back of the Home Depot, Musaed was observed pulling out a foot long knife, and then police said, “Three of the employees grabbed onto the cow…one employee… pulled out a knife and proceeded to cut the cow’s throat.”

It prompted a police officer to raise his arms in disbelief. He then had this exchange with one of the store employees who tackled the cow.

“Officer: you know this is a big, this is a problem. This is not something that can be done.”

Saba employee: “We try to do our best, you know.”

Officer: “Okay, but you guys get, like, you get a leash, you got something, like, like this kid here just watched you slit a cow’s throat.”

Saba employee: “They come in our store all the time.”

Officer: “Okay, but we’re not in your store right now, you’re in the back of Home Depot.”

Bloomfield police gave Musaed a ticket for creating a public disturbance, noting in the incident report that Musaed and his coworkers appeared unremorseful.

The owner of Saba may not be smiling.

The incident prompted multiple local, state, and federal agencies to investigate, prompting them to close the business for various violations.

It would be only natural to read a story like this and immediately get angry at these Muslim immigrants bringing their Third World ways of life to our civilized Christian country, and you might even be so irate that you’d want to kick out all the Muslims here, and send them packing back to their home countries, as President Trump has recently suggested about certain members of Congress.

However, while we can certainly agree that Muslims have no place whatsoever in a rational and healthy Christian society, we need to understand that Muslims are a symptom of a deeper problem, and not the problem itself.

We have cows being slaughtered in our Home Depot parking lots because we have a jewish problem.  It was through jewish political agitation that the immigration laws of America were radically changed in 1965 to no longer favor immigrants from White Christian countries, opening the floodgates to the non-White Third World.

You see, Jews didn’t want to be the only visible minority in America besides their Black political pawns, and if they flooded America with every other color, Jews could fade into the background and hopefully go unnoticed while they continue to subvert and destroy our once great nation, using Muslims as their proxy warriors as they did in Spain 1,500 years ago.

But to quote Corneliu Zelea Codreanu, “A country has the Jews it deserves.  Just as mosquitoes can thrive and settle only in swamps, likewise the former can only thrive in the swamps of our sins.”

The incident was caught on police officer’s bodycam: