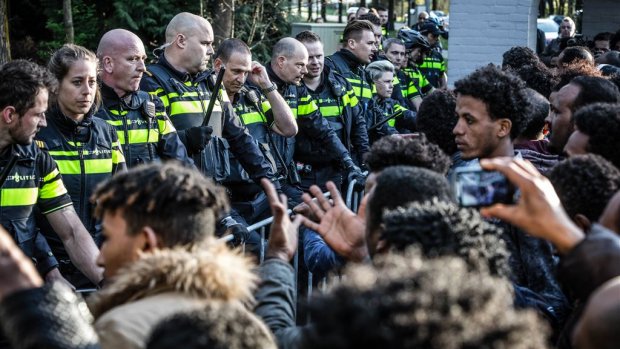 Multiple Amsterdam businesses received an email threatening them with hand grenades or shootings if they do not pay 50 thousand euros in bitcoins to the sender:

The email, which is in the possession of AT5, was sent to at least three coffeeshops and Club ABE on Amstelstraat since May this year. The writer refers to the municipality of Amsterdam’s policy to close businesses after a shooting or an explosive was found there.

“You probably noticed how many entrepreneurs have had to close their doors recently by order of the municipality. To prevent you from being the next one, you must immediately take action”, the email reads, according to the broadcaster. The writer instructs the entrepreneur to create an account on coinmama.com or coinbase.com, buy 50 thousand euros in bitcoin, and transfer it to a specific address. “After that you will never hear from us again.”

If payment isn’t made in a week, the amount is doubled. “If we do not receive the amount of 100k within 5 days, we will make sure that you can close your doors. This can be done by shooting a bullet into your facade or tying a grenade to the front door”, the email reads. “If we find out that you have filed a report or shared this message with someone else, we will immediately ensure that you can close the doors for at least 3 months. As soon as you get permission again from the municipality to open your doors, we will come again unless you pay 200k.”

Club Abe received this email in May. In August last year there was already an incident with a hand grenade tied to the club’s door. “It could be that the same person or group is involved, but there’s no clarity on that yet”, co-owner Marcel Norbart said to the broadcaster. The club immediately reported the email to the police. “The detective told us that the mail was known to them, so we were not the first. We did not pay. Such a mail indicates to us that there is no longer any logic behind the leaving of grenades; after all they target from patisserie to a hotel. A worrying phenomenon.”

Maurice Veldman, the lawyer representing a number of coffeeshops in the city, told AT5 that the coffeeshop owners are not impressed by the email. “These types of threats are not taken seriously. They are very easy to make. But we have to report this, because coffeeshops signed a covenant with the mayor, which states that they are obliged to report everything related to safety”, the lawyer said. He stressed that none of the coffeeshops paid the demanded amount and there have been no incidents.

A noteworthy point is that the municipality of Amsterdam recently changed its policy on closing businesses after a shooting or explosive. “We pay attention to the fact that criminals should not start thinking: if we leave a grenade in front of the door it will be closed. So we are gradually becoming more precise in the application of measures”, mayor Femke Halsema said to the broadcaster in September.

There have been multiple incidents involving hand grenades and other explosives in Amsterdam since the start of last year. Last week a hand grenades were found on Bijlmerplein and in front of a hotel near one of the southern entrances of Vondelpark, and an explosive was found in front of a business on Lemelerbergweg in Zuidoost. Earlier in this month a firebomb was thrown into restaurant Hotel Buiten on Sloterplas.

In August there were five incidents involving grenades in the Amsterdam area. A grenade exploded in apartment building Buekehnorst in Diemen on August 31st. An explosive was found on Voetboogstraat on August 16th. A day earlier a grenade exploded in front of the Marovaan restaurant on Johan Huizingalaan. And the day before that explosives were found on Jan Evertsenstraat and again Johan Huizingalaan.

A grenade exploded in front of a home on Nieuwenhuysenstraat in the Amsterdam district of Slotermeer on July 25th, and one was found at a cocktail bar on Korte Leidsedwarsstraat in January. Last year grenades were found at club In the City on Leidseplein and Club ABE on Amstelstraat.

As we have previously reported here, bombings, threats of violence, and extortion have become literally an every day occurrence in the once-peaceful country of the Netherlands.  These Muslim terror gangs have been emboldened by the politically-correct environment of the country where everyone has been conditioned to ignore the race of the perpetrators of this violent crime wave — and if they do notice the race of the perps, they have been conditioned to fear being called a “racist” more than they are of becoming victims of these bombing attacks.

Like the Swedes, the Dutch people are on life support, barely able to muster the courage to defend themselves and their culture against the islamification and judaizing of their country.  This problem could be solved in a week by simply sending armed forces into the Muslim “no-go zones” and do a clean sweep, arresting all suspects and subjecting them to serious interrogation, prior to their deportation.  All Muslims should be micro-chipped to ensure that they will be detected if they attempt to re-enter the country.  But that’s what a healthy country intent on its own survival would do, and right now the Dutch would rather wave the long goodbye to the world.