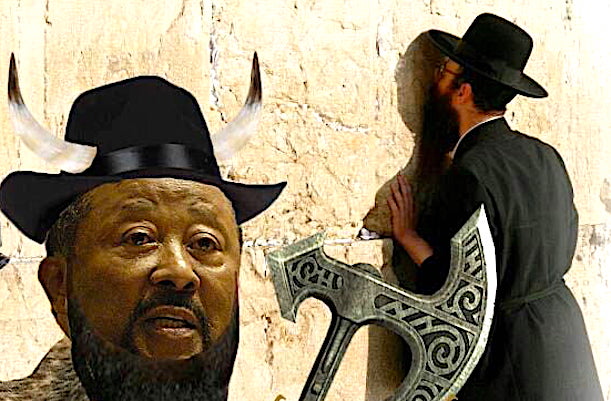 The first Jewish Editor-In-Chief of National Geographic, Susan Goldberg, has decided to put the iconic Vikings in her Marxist cross-hairs, by enlisting a group of like-minded radical writers and academics to deconstruct the traditional “dangerous” image of these Aryan warriors and recast them as something more palatable to her Jewish sensibilities:

In popular imagination, Vikings were robust, flaxen-haired Scandinavian warriors who plundered the coastlines of northern Europe in sleek wooden battleships. But despite ancient sagas that celebrate seafaring adventurers with complex lineages, there remains a persistent, and pernicious, modern myth that Vikings were a distinctive ethnic or regional group of people with a “pure” genetic bloodline. Like the iconic “Viking” helmet, it’s a fiction that arose in the simmering nationalist movements of late 19th-century Europe. Yet it remains celebrated today among various white supremacist groups that use the supposed superiority of the Vikings as a way to justify hate, perpetuating the stereotype along the way.

Now, a sprawling ancient DNA study published today in the journal Nature is revealing the true genetic diversity of the people we call Vikings, confirming and enriching what historic and archaeological evidence has already suggested about this cosmopolitan and politically powerful group of traders and explorers.

Who were the Vikings? The answer has never been clear cut. The term “Viking” is itself contested; the English term has its origins in an Old Norse word, víking, with a variety of meanings that range from raiding to exploring to piracy. Usually used by people on the receiving end of violent encounters, it described groups of Scandinavian seafarers between A.D. 750 and 1050—the period now known as the Viking era.

The Nature study brings together genetic data from 442 humans whose remains date from around 2400 B.C. to A.D. 1600—all buried in areas where the Vikings are known to have expanded. Some were simply located in places, like Greenland, where they journeyed; others were buried along Scandinavian-style artifacts like coins, weapons, and even entire boats.

It was a logistical challenge to bring together the hundreds of ancient samples, sourced from more than 80 archaeological sites in northern Europe, Italy, and Greenland. Then there was the task of analyzing the sheer volume of information extracted from the human remains. “I couldn’t have imagined the computational challenges with this data set,” says evolutionary geneticist Eske Willerslev, a professor of ecology and evolution at the University of Copenhagen and director of its Center of Excellence in Genetics who led the Viking genome project.

The DNA analysis revealed Vikings were a diverse bunch, with ancestry from hunter-gatherers, farmers, and populations from the Eurasian steppe. The research also pinpoints three major genetically diverse hot spots where people mixed with people from other regions during the era: One in what is now Denmark, and one each on the islands of Gotland and Öland, in what is now Sweden. All three locations are thought to have been hotbeds of trade at the time.

But though Vikings set off from—and in some cases returned home to—Scandinavia, the genetic analysis reveals they didn’t interact as much within the greater Scandinavian region as they did outside it, mixing with a broad range of peoples they encountered in their far-flung travels.

“It’s pretty clear from the genetic analysis that Vikings are not a homogenous group of people,” says Willerslev. “A lot of the Vikings are mixed individuals” with ancestry from both Southern Europe and Scandinavia, for example, or even a mix of Sami (Indigenous Scandinavian) and European ancestry.

“We even see people buried in Scotland with Viking swords and equipment that are genetically not Scandinavian at all,” he adds.

Willerslev says the results prove that the Viking phenomenon wasn’t purely Scandinavian. “It has its origins in Scandinavia, but it’s spreading out and associating with other groups of peoples around the world.”

The subjects also don’t have as much in common with modern Scandinavians as you might think. Only 15 to 30 percent of modern-day Swedes share ancestry with the studied individuals who lived in the same region 1,300 years ago, suggesting even more migration and mixture of peoples after the Viking era. Nor did Viking-era residents of the region conform to stereotypical Scandinavian looks: The ancient individuals, for instance, had on average darker hair and eyes than a randomly selected group of modern Danes.

The genetic data confirms what researchers long suspected from historical and archaeological evidence, which paints a picture of Vikings as a diverse group unbound by nation or ethnicity…

To Miguel Vilar, former senior program officer for the National Geographic Society, it comes as no surprise that the findings paint such a complex picture of Viking heritage—one that runs counter to modern notions of nationalism and cultural identity…

What the massive DNA study cannot resolve, however, is the question of how the Viking phenomenon began in the first place. If ethnicity did not bind these people together, what did? Was it the technological ability to build seaworthy boats and wage war efficiently on the water, or were other factors at play?

“People can adopt and adapt to dominant cultural modes of survival,” Zori says. “For whatever reason, being a Viking was one of the primary modes of surviving and being successful economically and politically.”

With new confirmation that at least 442 Viking Era humans were genetically diverse, researchers can now expand their search for Viking roots. “This is a magnificently large study, but it’s really only 450 skeletons,” says Byock. “It’s a large initial step.” He hopes it’s just the beginning of a wider consideration of the era’s genetic history.

“It’s probably true that genetics are a little more believable than Viking sagas,” adds Zori. But only time, and additional research, he says, can round out the picture.

Now the hard work of grappling with the massive study’s implications—and combining textual and archaeological evidence with the new DNA results—can begin. There’s still much to learn about how the cultural catalysts we call Vikings lived and moved, and what happened as they sought adventure and influence. “Migration has always been a factor in human history,” says Zori.

Yes, it would appear that these historically-revised Vikings have much more in common with Jews than they do with ethnic Scandinavians.

And, of course, White Europeans can’t have any cultural icons that might promote dangerous feelings of “White supremacy” that could be threatening or offensive to the Susan Goldbergs of the world.

But all of this Jewish Revisionism of European history isn’t based on science at all — DNA results are not objective and binary –they can be “massaged” into supporting any conclusion that you wish to prove.

And that is why Jewish-owned and run DNA companies try to convince everyone who takes their bogus tests that most of them have some small Ashkenazi genetic admixture from their remote past.

After all, a world in which everyone is convinced that they have some Jewish ancestry is a world that is much “safer” for all Jews.

And if the White race especially can be mislead — using deceptive DNA “science” — into believing that they are all race mixed to begin with, they will be more receptive and susceptible to the non-stop Jewish miscegenation propaganda in their media empire.

A race mixed populace is far easier for the Jewish overlords to control and dominate — racially homogeneous nations have a history of expelling Jews when their collective welfare is threatened by Jewish shenanigans.