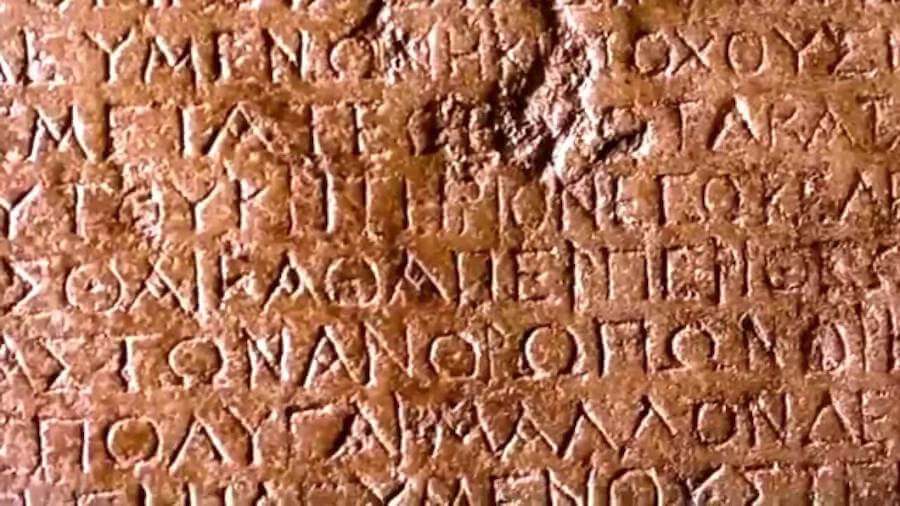 A stone inscription acquired on the antiquities market of Nazareth in 1878 appearing to be a rescript of an imperial Roman edict was dubbed “The Nazareth Inscription.”  Written in ancient Koine Greek, its main purpose is to give notice that the punishment for stealing a corpse from a stone sealed tomb will be death to the perpetrator.

Many have argued that this edict was written in response to the rumor that was started by the Jews who paid off the Roman soldiers to lie about the disappearance of the body of Christ from his tomb, and to claim that it was stolen by His disciples:

The edicts reads, ““It is my decision [concerning] graves and tombs— whoever has made them for the religious observances of parents, or children, or household members – that these remain undisturbed forever. But if anyone legally charges that another person has destroyed, or has in any manner extracted those who have been buried, or has moved with wicked intent those who have been buried to other places, committing a crime against them, or has moved sepulchre-sealing stones, against such a person…I wish that [violator] to suffer capital punishment under the title of tomb-breaker.”

Based on epigraphy, the inscription dates to sometime between the 1st century BC and the 1st century AD. Spelling, grammar, and word usage, however, narrow the date considerably. Multiple studies have been done on the inscription over the past 90 years, with scholars generally dating the inscription to the late in the reign of Augustus, Tiberius, Claudius, Caligula, or Nero–a period spanning approximately the first 68 years of the 1st century AD (Cumont, Abel and Lagrange, Gryzbek and Sordi, Cerfaux, Schonbauer, Wegner, Loesch, de Sanctis, Zulueta, Green, Guarducci, Billington).

The period of the reigns of Tiberius and Claudius are the most agreed upon by scholars for the composition of the edict, though if the edict was issued in the Galilee region, it may push the date to the beginning of the reign of Claudius because of the change in political hierarchy at the beginning of his reign (de Sanctis, Kennard). Thus, the composition date was probably between 14 and 54 AD, but more likely about 41 or later when Claudius took power.

The content of the inscription, however, is by far its most interesting aspect. The edict focuses in on anyone who has taken away a corpse from a tomb for “wicked intent,” specifically a type of tomb that is sealed with a stone. A new type of punishment for this crime is then commanded–the death penalty (formerly it was a civil case often settled by paying a fine).

Although many details of the inscription could be analyzed, there are three which are most important: 1) the stealing of a corpse from a tomb, 2) a stone sealed tomb, and 3) the extreme reaction to the crime. The Gospel of Matthew records what the official story about the missing body of Jesus was supposed to be: “Some of the guard came into the city and reported to the chief priests all that had happened. And when they had assembled with the elders and consulted together, they gave a large sum of money to the soldiers and said, “You are to say, ‘his [Jesus’] disciples came by night and stole him away while we were asleep.’ And if this should come to the governor’s ears, we will win him over and make you free from care.” And they took the money and did as they had been instructed, and this story was widely spread among the Jews, to this day” (Matthew 28:11-15).

The story about the missing body of Jesus was supposed to be that the disciples successfully carried out a plot to steal the body of Jesus from the tomb in order to make it look like He had resurrected and walked out Himself. This correlates with the concern of the edict over people stealing a corpse from a tomb with “wicked intent,” rather than looting the tomb for valuable items to sell, which was the normal practice of tomb robbers.

The Gospel of Matthew details this type of tomb. “[Joseph of Arimathea] took the body and wrapped it in a clean linen cloth, and laid it in his own new tomb, which he had hewn out in the rock, and he rolled a large stone against the entrance of the tomb” (Matthew 27:59-60). Thus, the type of tomb specifically referred to in the edict is the same type of tomb that Jesus was buried in.

The third notable detail is the extreme reaction to the crime of stealing a corpse from a tomb. Normally, this would not even happen–tomb robbers were after valuable grave goods that were buried with people, such as jewelry, coins, furniture, glassware, etc. However, if a body was stolen, the punishment was small, such as a fine paid to the offended family.

Yet, the edict commands a new punishment–the most harsh punishment possible for any crime. This new prescription of the death penalty indicates that whatever had happened in the region of Iudaea Province in association with the stealing of a corpse had caused a significant enough problem that the Roman government intervened and enacted a new law which would attempt to prevent any repeat of this type of event.