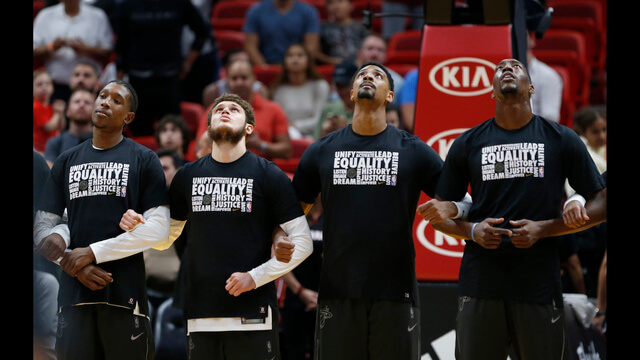 “Several NBA teams have played what is known as the “negro national anthem” at games during Black History Month thanks in part to the urging of a retired Howard University professor.”

“Eugene Williams, a 76-year-old retiree in Clinton, Maryland, has made it his goal to get professional and collegiate teams to play “Lift Every Voice and Sing” during February. He has been calling and writing teams for the past six months.

The Washington Wizards became the fourth NBA team to play the song at a game, doing so during a timeout midway through the first quarter against the Golden State Warriors on Wednesday night. As the song played, a video was shown with on-court highlights and Wizards players engaging in community activities.”

Comments:
It doesn’t seem to occur to black NBA players that it is white fans who have made them multi-millionaires for throwing a ball through a metal hoop. The more “black” the NBA comes, the less that whites will take interest in it, and there will come a point where whites realize that there’s nothing left for them–and that the black players hate them.

When that happens, these players will be “workin’ at the car wash” instead of pushing their agenda in everyone’s faces.