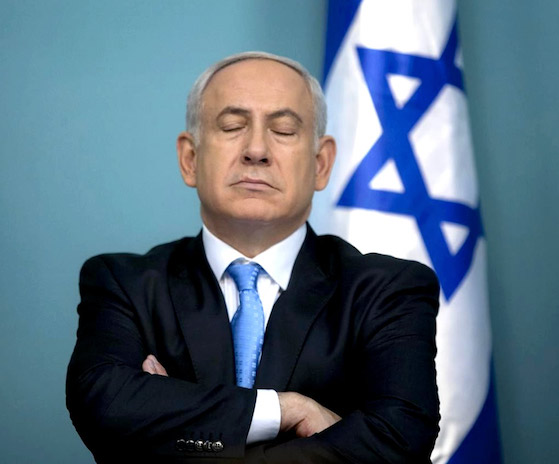 During the Jewish Media Summit at the Government Press Office in Israel, Israeli PM Bibi Netanyahu claimed that in the very near future, the majority of the world’s Jews will be living in Israel:

As one of 150 participants from 30 countries at a Government Press Office-sponsored Jewish media conference held here two weeks ago, I marveled as the prime minister enjoyed engaging with our group, getting a big laugh when, interrupting the first questioner’s reference to “mainstream media,” he responded: “What’s that?”

…So when the prime minister popped in, unscheduled, during our visit to the Knesset, I was surprised by his high spirits — and disappointed that, for the most part, the questions posed to him weren’t sufficiently challenging, given the various corruption charges he faces; the perception that his close relationship with President Donald Trump is alienating many liberal American Jews and threatens Israel’s longstanding bipartisan support in Congress; and his fragile, one-vote majority in the Knesset (which is why he was in the building, to cast votes in a series of bills that day).

…At the opening session, one young participant asserted that “we’re here to help improve the image of Israel.” That was consistent with the message we received from several government leaders we met with during the week, though some of us viewed the conference as an opportunity to be informed rather than persuaded.

…Among the more substantive remarks from Netanyahu during our time with him at the Knesset was his emphasis on “the shrinking diaspora” and “the disappearance of Jewish identity” among younger Jews outside of Israel. He took pride in asserting that very soon, “for the first time in 2,000 years,” Israel will be home to the majority of world Jews. But he said he is deeply worried about assimilation abroad.

…The issue of distinguishing between anti-Israel and anti-Semitic behavior was a repeated theme during the conference, which devoted a 90-minute panel discussion to the topic. Efraim Zuroff, chief Nazi hunter and director of the Simon Wiesenthal Center’s Israel office, summed up the dilemma neatly in observing: “Eastern Europe loves Israel and hates Jews.”

Near the conclusion of the lively discussion, which turned into a brief but ugly shouting match over West Bank policies between the other two panelists, Caroline Glick, senior columnist for The Jerusalem Post, and Anshel Pfeffer, correspondent for the left-wing Haaretz, moderator Haviv Gur, an editor at The Times of Israel, observed that “even we on the panel can’t agree on one definition of anti-Semitism.”

What is stopping every Jew in the world from moving to Israel?  If the world is as hostile to Jews and as rife with antisemtism as the ADL and SPLC claims, then why do Jews continue to endure the “trauma” of voluntarily living among all this “hate”?  One possibility is that Jews honestly think that they can somehow eradicate antisemitism among the goyim, but if history proves anything, it shows that whenever Jews live among non-Jews, there will be tension and conflicts.  So eradicating antisemitism, once and for all, is the quixotic quest of a fool.

The other possibility that so many Jews continue to live among the antisemites is that they actually prefer it because, well, the antisemitism really isn’t as bad as the jewish-media makes it out to be.  And another possibility is that if all the Jews were in Israel, who would be left subvert and destroy all the White nations?  The Blacks, Mexicans, Asians, and Muslims certainly can’t be trusted to carry on the jewish agenda, nor are they clever enough to pull it off.  If the Jews want a job done right, they will have to do it themselves.