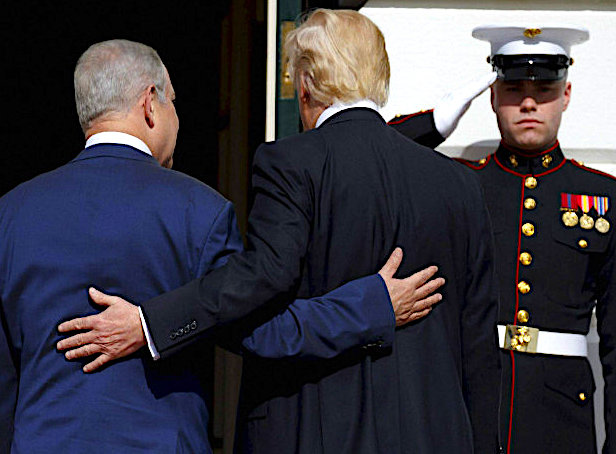 Israeli Prime Minister Benjamin Netanyahu wants to show his appreciation to President Donald Trump for all he’s done to promote and support the Zionist takeover of Palestinian territory by naming a village in the Golan after him:

If Prime Minister Benjamin Netanyahu has his way, alongside Katzrin, Ramot and Ramat Magshimim on the Golan Heights, there may someday soon be a community named Kiryat Trump.

Netanyahu, who on Tuesday toured the Golan with his wife and sons, said a community or neighborhood on the Golan Heights should be named after US President Donald Trump in appreciation for his decision last month to recognize Israeli sovereignty over the strategic plateau.

“I am here with my family and many citizens of Israel at the foot of the Golan Heights, happy with the joy of the holiday and our beautiful country,” Netanyahu said in a video post. “And there is more joy – a few weeks ago I brought President Trump’s official recognition of Israeli sovereignty over the Golan Heights forever.”

Netanyahu said there “is a need to express our appreciation by calling a community or neighborhood on the Golan Heights after Donald Trump. I will bring that to the government [for approval] soon.”

Jews freely admit that Donald Trump has done more for Israel and the Zionist cause than any sitting president in American history.  When Israel wanted America to move its embassy to Jerusalem, Trump signed off on it.  When Israel wanted to annex the Golan Heights, Trump signed off on it.  And next on the list is letting Israel annex more of the “disputed” West Bank.  And in case anyone has a problem with any of this, Trump is greenlighting hate crime legislation to make criticism of Israel illegal.

As millions of invaders from Latin America flood over America’s southern border with impunity, Israel is enjoying unrivaled border security and economic prosperity.  And the Israelis have never been closer to realizing their dream of building their “third temple” on the Temple Mount.  Trump has spent his entire first term in office making sure his number one donor, Sheldon Adelson, is taken care of, and with his re-election all but assured, Trump can dedicate his second term executing his “peace plan” which will be more of the same.  And all Trump gets is one lousy Palestinian town named after him?