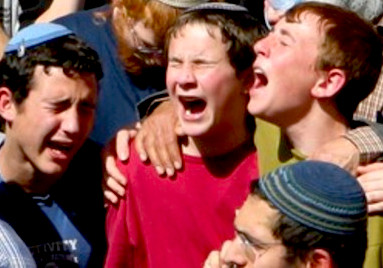 According to the antisemitism Worldwide 2018 Report released on Wednesday by the Tel Aviv University Kantor Center for the Study of Contemporary European Jewry, everywhere in the world Jews are feeling a heightened sense of insecurity:

A Report of the French Ministry of the Interior and the Jewish community depicts anti-Semitism in France during 2018 as a daily occurrence, notes the Kantor report, adding this devastating description:

“They do not feel an integral part of society anymore and sometimes they even sense a state of emergency. anti-Semitism is mainstreaming, even normalized as a constant presence, in the public as well as in the private sphere. A rise of 13% in the number of major violent anti-Semitic incidents was registered; 13 Jews were murdered.”

No matter what others might tell us, this has to be the most common sensation shared by Jews around the world, only a few months before the 80th anniversary of the start of World War II. There’s no place which is not plagued by Jew hatred. Indeed, the report offers thorough examinations of a long list of countries: Australia, Austria, Belgium, Canada, Czech Republic, France, Germany, Greece, Hungary, Italy, Moldova, the Netherlands, Poland, Romania, South Africa, Spain, Switzerland, Turkey, the United Kingdom, and the United States of America.

This sense of there being no place to go directly connects us to the plight of our parents and grandparents in Europe in the 1930s and ’40s. But unlike our forefathers and foremothers in Europe, we have no illusion about this massive wave going away – not even, as some idiots on the left are arguing, Israel were to displace half a million of its own Jewish citizens and usher in Hamas rocket launchers in their place.

Israel is not included in the list, which is a shame, seeing the amount of anti-Semitic attacks coming from the Palestinian Authority and Gaza, as well all the countries in the Middle East. Perhaps it was simply a matter of space. Israel is featured heavily in the report, though, seeing as being anti-Israel is the politically correct version of Jew hatred.

Over the last ten years or so, the “right wing” started comparing America to Germany during the decadent, jewish-dominated Weimar Republic of the 1930s, but now the Jews have jumped on the bandwagon, claiming that the world hasn’t seen this much antisemitism since the 1930s in Germany.  Both the Left and Right want it to be the same era but for different reasons, but the reality is that today there is no highly organized opposition to jewish power as there was in 1930s Germany.

But despite the absence of “another” Hitler, the Jews are not going to lose this opportunity to ratchet up the hyperbole, and double down on their contention that “another” Holocaust could very well be in the works.  And it would be the height of absurdity if this report made the dubious claim that the Palestinians are committing acts of “antisemitism” when they resist the Israeli theft of their land and the genocide of their people, and that is why it was left out, not a mere oversight.  And if you think the Palestinians do have a right to fight back, clearly you want to make Jews everywhere in the world feel “unsafe”.