New Book Claims 225,000 ‘Jews For Jesus’ Were Ethnically Cleansed In The Holocaust™ 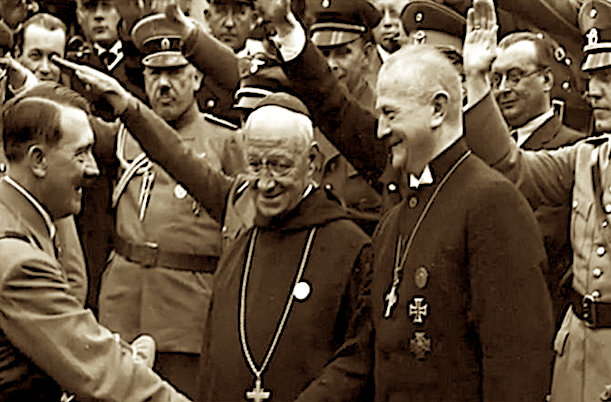 (Israel Today) Holocaust enthusiasts are ever on the lookout for exotic and overlooked victims of Adolf Hitler™ — and in that vein a recent book makes the astonishing claim that Christian-professing Nazis™ nevertheless murdered 225,000 of their “fellow” non-Aryan Christians because they just so happened to be “ethnically Jewish”:

“Amidst the darkness of the Holocaust, the light of Christ was shining.” A statement quite likely to cause offence, especially among Jewish people – until they understand that I am talking about Jewish disciples of Jesus who were subjected to the horrors of the genocide together with their fellow Jews.

Until now, little has been known of the fate of the estimated 225,000 European Jews thought to have committed their lives to Christ by the outbreak of the war.

But a new book by Australian author Kelvin Crombie has unearthed the profoundly moving and heart-breaking stories experienced by many of these believers, known at the time as ‘Jewish (or Hebrew) Christians’, or by the Nazis as ‘non-Aryan Christians’.

As one of them testified, this is “the story of Jewish Christians who perished at the hands of people who considered themselves a Christian nation!”

As part of his as yet incomplete research into the fate of these brave souls, shunned both by the Nazis and their fellow Jews, Crombie’s Bazyli and Anna Jocz (pronounced Yotch) focuses on this especially significant family in the context of the overall picture of the Dante’s Hell that cast its evil shadow over Europe, and Poland in particular.

It is obvious from this initial evidence that the vast majority, including a number of missionaries, shared the suffering of their fellow Jews. The Nazis cared not a jot what people believed; it was their racial identity that marked them out for mass slaughter.

Poland was home to millions of Jews in the 1930s and was the focus of much activity by a number of gospel societies, including the Church’s Ministry among the Jewish people (CMJ), who were all reporting lively congregations in Warsaw and other cities.

The book is most helpfully set against the background of the wider progress of the war while also explaining some of the key contributory factors towards the emergence of Nazism in all its raging fury. As well as fanatical nationalism were the forces of rationalism, the teachings of Charles Darwin and the influence of the occult and liberal Christianity, all of which conspired to the devaluing both of the Jewish people and true followers of Jesus.

Many German Jews had ‘converted’ to Christianity simply in order to fit in better with society, yet it did not protect them from the butchers. But those who truly followed Messiah Jesus were rejected both by the Nazis and their fellow Jews.

There were two chief reasons for the latter scenario – first, because the early Christians (who were mainly Jewish) refused to join the revolt against Roman occupation which led to ancient Israel’s ultimate defeat and desecration in 135 AD, and second, because persecution ever since has been seen, in Jewish eyes at least, as driven by ‘Christian’ countries often with support from the Church.

Meanwhile the Jocz family have extended their evangelistic witness to four generations, partly through Jakob, Bazyli and Anna’s eldest, managing to escape the Holocaust because he was addressing a conference in England when war broke out. He later served as parish priest at St John’s, Downshire Hill, in Hampstead, north London, while continuing to work for CMJ.

Anna was a very brave woman who, because she didn’t look Jewish, got away with being a Polish Gentile while hiding her ailing husband in a wood shed. When he eventually came out for a brief respite, he was spotted by the Gestapo and summarily shot, with Anna sustaining terrible injuries that left her paralysed from the waist down for the rest of her life.

Ironically, it was after she was injured in a fall as a young girl that her father took her to see a Jewish doctor who believed in Jesus, which sparked off the family’s commitment to their Messiah. Bazyli and Anna thus helped sow the seeds of what later became known as the Messianic Jewish movement that has since spread to North America, Israel and throughout the globe.

Among the many others contributing to this harvest were the evangelists of the Mildmay Mission to the Jews (now Messianic Testimony), only one of whose seven workers survived – and he had lost his wife and been “hunted and driven to the extreme limits of human endurance”.

Most of the war-time Polish believers paid the ultimate price for their faith. And in the end a staggering six million Jews perished at the hands of the Nazis, with many of the traumatised survivors experiencing little better than a living death.

A heart-rending account is told of a couple and their young daughter, when facing execution, bowing their heads in prayer as they were machine-gunned into an open grave. In another place, after the brutes had shot the parents, their children were heard singing hymns of praise as they were driven away in a lorry!

As modern Israel rose from the ashes of the Holocaust in fulfilment of Ezekiel’s vision of the Valley of Dry Bones (Ezek 37), so the Messianic movement of Jewish followers of Jesus emerged triumphant from the blood-stained soil of Poland.

The official Gas Chamber™ narrative has become increasingly difficult to maintain — defying simple logic and basic precepts of science — which has forced Holocaust™ propagandists to look for bodies elsewhere in order to stubbornly insist upon the kabbalistic 6 Million™ final answer.

And here again we have Jews competing with each other — and the rest of the world — to win the coveted Greatest Victim Of All Award™.

Tag line for the upcoming feature film: Jews, hated and ostracized by their fellow Jews for converting to Christianity, only to be murdered by “Christian Nazis” — oh, the cruel hand of fate — the Unimaginable Suffering™…

The image will forever haunt us — of little Jewish children singing hymns to Christ as they were driven away in a “lorry” — no doubt to the dreaded Gas Chambers™ — or perhaps to one of the many Day Care Centers in the “death camps”.

Like the Christian martyrs thrown to the lions in front of a packed house at the Roman Colosseum, we now have Jews, heads bowed in prayer to Christ, machine-gunned down in a Holocaust Of Bullets™ — for no other reason than they were “ethnically Jewish” — how unreasonable and unfair!

We won’t ask how this author came up with the figure of 225,000 ‘Jews For Jesus’ killed by the Nazis™ — questioning the veracity of that ghastly number could be motivated only by antisemitism™ — rather than by an insensitive insistence on the truth.

The lesson here is clear — just because someone is a professing Christian doesn’t mean they aren’t secretly a Nazi™ who won’t think twice about suddenly grabbing the nearest Jew at hand — especially a Christian Jew — and throwing them in a Gas Chamber™ or mowing them down with a machine gun — for no reason whatsoever™.