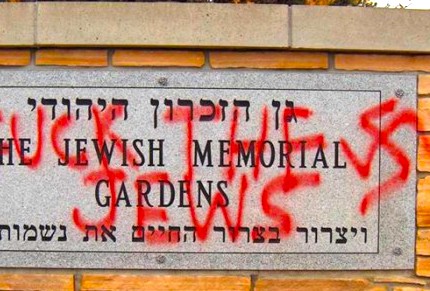 A new book by Wilfred Reilly, a professor of political science at Kentucky State University and a recognized and “reputable” expert on hate crimes, is throwing cold water on the idea constantly promoted by the Anti-Defamation League that America is filled with racial violence and antisemitism:

What he found is fascinating.  Based on real data, the majority of “hate crimes” reported in the media turn out to be false or hoaxes, yet outlets quickly move on to other stories when an incident is disproved.

In a thoughtful opinion piece in The Wall Street Journal on Tuesday, Jason Riley detailed several examples of those hoaxes and summarized the problem of false hate crimes being reported as fact in the media.

“In 2012 a popular gay bar in suburban Chicago was destroyed by fire, and the owner cited homophobia as the reason. The same year, black students at the University of Wisconsin-Parkside reported death threats from hate groups and found a noose hanging from a dorm room door,” Riley wrote.

“Ultimately, the owner of the bar pleaded guilty to arson and insurance fraud. And a black student at the university confessed to sending racist threats and planting a noose,” he continued.

Professor Reilly, the Kentucky State University expert who is also the author of the aptly-named book “Hate Crime Hoax,” became fascinated by the false crimes.

As he became skeptical of the reporting on this issue, he did what any good researcher would do: Compile a database and start pouring over the numbers.

“This phenomenon of fake hate crimes did not appear to be small-scale or regionally based,” Reilly said. He detailed many crimes that were first reported as bigotry against sexual or racial minorities across the country, most of which turned out to be fabricated.

Here’s the important part: the professor didn’t find just a handful of hoaxes. He discovered that over 70 percent of reported hate crimes ended up being hoaxes.

“Mr. Reilly eventually compiled a database of 346 hate-crime allegations and determined that less than a third were genuine,” Riley noted.

The data-driven approach to the question led the expert to conclude with “absolute confidence … that the actual number of hate crime hoaxes is indisputably large,” as he stated in his book. “We are not speaking here of just a few bad apples.”

Of course this article fails to mention that the vast majority of victims of these hoaxes are White people.  There is obviously a system in place to not only financially reward people who report ‘hate crimes,’ there is virtually no legal punishment for those who get caught faking these reports.  Simply make reporting fake ‘hate crimes’ a Federal crime with mandatory prison sentences, and the problem with evaporate overnight, but that will never happen, and even if such laws were put in place, for political reasons, they would never be prosecuted, as we all know that only Whites commit ‘hate crimes’.

And without a doubt the ADL would block any efforts to criminalize reporting fake hate crimes because the ADL itself collects millions every year in donations from terrified Jews who open their wallets whenever the ADL reports on these hoaxes as if they are real.  Without fearful Jews, the ADL goes broke, and we can’t have that.  Of course the greatest hate crime hoax ever perpetrated, the so-called “Holocaust”, set the precedent for all these lesser hoaxes to go unchallenged, and as long as the Big One is allowed to stand, they have no choice but endure the common street variety of hoaxes, a small price to pay for their Golden Calf of endless reparations.