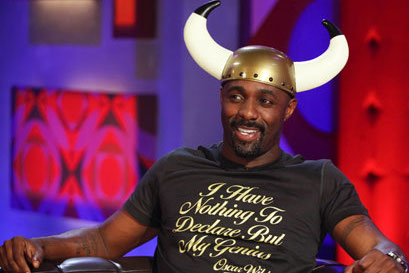 A new “documentary” by Sweden’s jewish-controlled national SVT broadcaster is depicting the first Swedes as African dark-skinned hunters and collectors, who moved to Scandinavia from the south at the end of the Ice Age:

“The First Swedes”, a new documentary by the SVT national broadcaster, has been met with critical reaction and backlash ahead of its airing.

According to SVT, the first modern people who entered today’s Sweden were dark-skinned hunter-gatherers who followed the migrating reindeer.

Mattias Jakobsson, a professor of genetics at Uppsala University and a researcher of the Atlas project, which aims to map the genome of Sweden’s early population, stressed that unlike present-day Swedes, their ancestors had dark skin, as a legacy of their African origin.

“They look was quite similar to the people that at that time lived in today’s Luxembourg, Spain and Germany. Their look would be quite unusual today, blue eyes with dark skin.”

Shortly after their arrival, they blended with people from today’s Russia, who brought along a more modern technique for manufacturing tools and arrowheads, SVT reported.

The new population group lived off seal hunting and fishing and had a lighter skin colour, which made it easier to absorb vitamin D in northern latitudes. Over the subsequent centuries, the two groups effectively melted together, producing some of Europe’s most diverse populations at that time.

Several thousand years later, about 6,000 years ago, the first farmers arrived in today’s Sweden from present-day Turkey and Syria, bringing with them the agricultural knowledge, pushing the original population farther north, SVT reported.

However, the report triggered strong reaction on social media, with many Swedes accusing SVT of deliberate propaganda aimed at whitewashing the present-day mass immigration with tales of diversity.

It’s unlikely that the Jews at SVT who produced this nonsense actually think that many Swedes over 12 years old will actually believe this Marxist clap trap, but it will go a long way to make their pet African and Arab migrant invaders feel a little more welcome.

If what the film alleges is true, then these Vitamin D-deprived recent migrants will start turning White-skinned and blue-eyed in no time at all, and before you know it, you won’t be able to tell which Swedes are which.

How many Swedes who are mocking these fake Black Vikings have the courage to mock the Jews in Sweden for being fake White Israelites?

If you’re going to give the Jews a free pass on their fake identity, you might as well accept that the original Vikings were black — both are equally absurd.