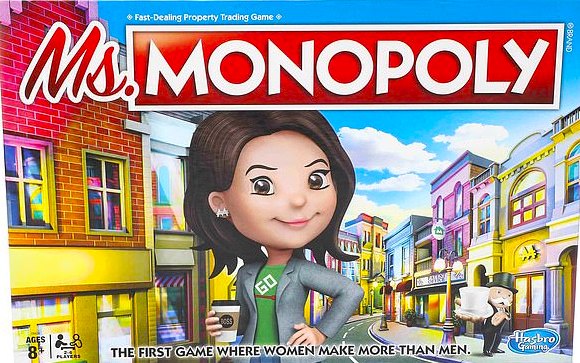 The latest edition of Monopoly has been given a new twist where women are paid more than men despite performing the same task, and players make their way around the board collecting things that allegedly wouldn’t exist without females:

Ms Monopoly tells players ‘Collect 240 salary as you pass GO, if you’re a man collect 200′ in what Hasbro, Inc. has dubbed the ‘first-ever game in the Monopoly franchise that celebrates women trailblazers’.

The game, where women also get a $400 higher payout of $1,900 at the start, features tokens such as a pen, a jet, a glass, a watch, a barbell, or Ms. Monopoly’s white hat, and a ‘Boss’ coffee-holding young brunette female character appears on the cover which reads: ‘The first game where women make more than men‘.

Featuring 24 Invention cards, the fresh take on the game replaces the image of the well-known top hat – wearing mature Mr. Monopoly who boasts a white mustache and waves a cane.

Ms. Monopoly gives new meaning to the franchise, as properties are replaced by groundbreaking inventions and innovations made possible by women throughout history,’ a Hasbro description reads.

‘From inventions like WiFi to chocolate chip cookies, solar heating and space station batteries, Ms. Monopoly celebrates everything from scientific advancements to everyday accessories – all invented by women.’

The train station icon on each side of the board is replaced with ‘ride share’, but spaces such as ‘Chance’, ‘Community Chest’, ‘Free Parking’ and ‘Jail’ remain the same as other editions.

Players of any gender and aged 8 years old up, can build business headquarters around the board to collect more money from players who land there.

‘Ms. Monopoly was created to inspire everyone, young and old as it spotlights women who have challenged the status quo,’ a Hasbro description continues.

Only through socialist affirmative action does a common cookie recipe become magically elevated to the lofty status of an “invention”, but when you’re trying to promote the lie that women can essentially replace men, it can be done only with a lot of smoke and mirrors.

A cursory look into any of the above-mentioned “inventions” attributed to “women” will show that all of them were first invented by men, which is exactly what we would expect, but don’t let reality interfere with your communist fantasy world.

Post-feminist women who have careers, especially in the hard sciences, experience the highest level of dissatisfaction with their lives, which should come as no surprise because when you base the whole premise of your life on the lie that women can find happiness and fulfillment play acting as men, you are destined to fail.

We, as a race, can survive without female astronauts and inventors, but we are doomed without women who want to be wives and mothers to nurture and raise the next generation of “misogynists”.