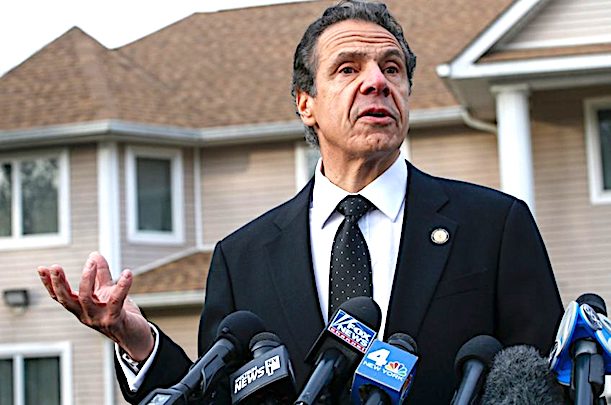 The New York state legislature passed a new ‘hate crimes’ act that will now consider murders where the victims’ race or religion is a contributing factor as ‘acts of domestic terrorism’:

The legislation, passed Thursday as part of the state budget, was renamed the Josef Neumann Hate Crimes Domestic Terrorism Act, to honor the victim of a stabbing attack in December at the home of a Monsey rabbi.

Neumann had remained in a coma from the time of the Dec. 28 attack to his death on March 29. The assailant’s knife penetrated Neumann’s skull. His right arm also was shattered. Four others were injured in the attack, which took place on Hanukkah.

The state budget also included funding for the State Police Hate Crimes Task Force, established in the 2018 to address the increase in bias-motivated threats, harassment and violence in New York state, AMNY reported. The budget includes $2 million to support the task force’s work, and to increase the monitoring of digital media for violence, intolerance, drug dealing and terrorism.

This new law provides a perfect illustration of how any violence whatsoever toward Jews is counter-productive and will ultimately be used to justify the abolition of many of our constitutional rights.

Just by naming this new law after a rabbi shows implicit bias toward favoring and protecting Jews above all others.  Clearly, no such law would have been enacted had a White Christian been stabbed to death.

After all, when a Black viciously murders a White Christian, police are never interested what the Black killer is reading online, especially if it’s racist anti-White material.

According to the statistics released by the SPLC, Black nationalists are the most violent ‘hate’ group in America.

And let’s not forget that this rabbi was killed by a crazed Black man with a long history of psychiatric problems.  Normally, liberal Jews would call for such mental patients to be given leniency, but apparently not when Jews are the victims.

But make no mistake: this new law is merely a stepping stone toward the ultimate goal of the Anti-Defamation League, which is to criminalize all forms of ‘antisemitism’ as ‘domestic terrorism’, regardless of whether or not any associated violent crime has been committed.

Ideally, they want to make any ‘antisemitic’ comment a legal pre-crime ‘red flag’ that will justify mandatory jail time and the loss of your Second Amendment rights, among other draconian measures.

And, of course, guess who gets to decide what constitutes ‘antisemitism’?

That’s right: the beneficiaries of these draconian laws.