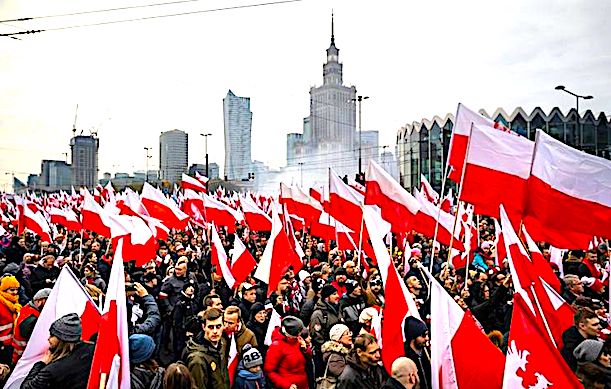 A new proposed law in Poland could allow Jews living anywhere in the world lay claim to over 30% of Poland’s privately-owned residential real estate by claiming legal ownership at the end of World War II:

Under existing laws in Poland, heirless property becomes the property of the state, and after WW2 there was a lot of property without owners (whether owned by Poles or Jews), which has been sold ever since. This law has the potential to cause national havoc, as the vast majority of Poles own their own homes. Even in the relatively cosmopolitan capital of Warsaw, 79% of city-dwellers own their homes and apartments.

Under S447, any Polish-Jew or descendent of said Polish Jew can lay claim to property to property deemed heirless and sold after the war, thus all land that can be claimed to have been owned by Jews before 1939 will be transferred to the global Jewish diaspora. If this law is put into practice, approximately 30% of Warsaw homeowners will be forced to pay “rent” to random Jews claiming to be Holocaust survivors or their descendants in New York City and Tel Aviv.

Before WW2, Jews owned the most valuable real estate in the centers of major cities and towns, while Poles were concentrated in rural parts. Warsaw was 30% Jewish, Białystok 42%, Tarnów 50%, Grodno 50%. Oświęcim, home of the Austrian military barracks that would later become Auschwitz, was 50% Jewish.

In this context, we can begin to understand the historical tension between Poles and Jews. The Polish fear of Jewish conquest, “JudeoPolonia,” is part of our national memory. “The Year 3333, or the Incredible Dream,” for example, is a 200 year old Polish book portraying a dystopian future where Poland is completely dominated by Jews. Teodor Jeske-Choiński expressed our fear in his 1912 fictional novel, embodied in a scene in the novel in which a Jewish character states “If you do not allow us to establish a ‘Judeo-Polonia state’ and a nation of ‘Judeo-Polish people,’ we will strangle you!”

…Jewish communism, what we call Żydokomuna, installed a Jewish dictatorship over Poland. During the Soviet invasion, many Jews helped the Red Army and committed numerous atrocities. Today, international Jewry has abandoned communism for world capitalism, and is using Donald Trump’s America to “strangle” us. The weapon of choice is S447 (Justice for Uncompensated Survivors Today (JUST)), which is the greatest existential threat to Poland in recent memory.

The Zionist racial bigotry behind S447 was foreshadowed by Israel Singer of the World Jewish Congress in 1996 when he stated, “More than 3 million Jews died in Poland and Poles will not be the heirs of Polish Jews. We will never allow it. We will harass them until Poland is ice covered again. If Poland fails to satisfy Jewish demands, it will be publicly humiliated and attacked internationally.”

Jews refuse to acknowledge the connection between their obnoxious and insatiable greed and any increase in ‘antisemitism’ in Poland.  If the Poles object to being raped yet again by these international gangsters, they will be smeared as ‘antisemites’.

These alleged ‘Holocaust’ survivors and their ‘suffering’ heirs would like nothing better than to sit on a beach in Tel Aviv and collect rent from hard-working Poles whose property has been confiscated under this draconian law.

Millions of Poles lost both their properties and their lives during World War II, but unlike Jews, they are not demanding ‘reparations’ from the Polish government, and their demands for reparations from Germany are merely political theater to make it more difficult for the Jews to steal their properties.

If the Jews try this scam, the Poles will not take it lying down; Poles are not like Swedes and Brits.  There will be violence in the streets, and it’s doubtful that the Polish police and army will side with the international jewish gangsters who are stealing the property.