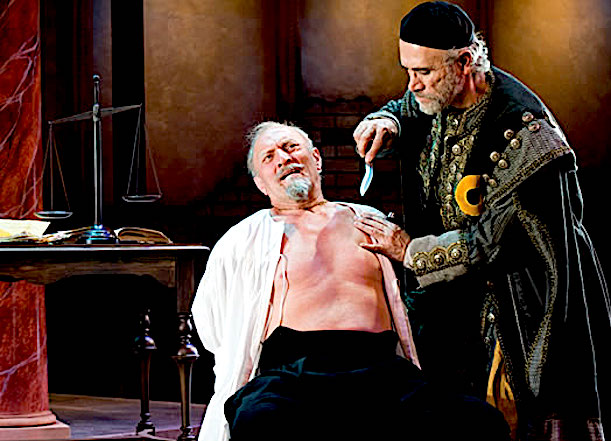 Renowned children’s author and playwright Sir Michael Morpurgo will omit The Merchant of Venice from the children’s book based on Shakespeare’s plays he is working on because he doesn’t want to “offend” Jews:

Sir Michael, 77, is modernising Shakespeare plays for children and teenagers in a book titled Tales from Shakespeare, designed to make them more appealing to a young audience.

The book will include works such as Romeo and Juliet, Macbeth and King Lear, which are fixtures of the school syllabus. But Sir Michael said that after rereading The Merchant of Venice – which is on A-level syllabuses – he could not “honestly” retell it, the Sunday Times reported.

“I did not tackle Shylock [the Venetian Jewish moneylender who agrees a loan on condition that if the borrower defaults, he will take a pound of his flesh]. I avoided [the play] because it worried me too much… There are assumptions right the way through about what it is to be a Jew and how Jews are thought of.

“The play can be antisemitic… and I could not tell it honestly. It would be offensive.”

He felt it was “too raw to write about for children”.

But it’s not “too raw” for children to read Hansel And Gretel in which an old White woman abducts children, puts them in cages to fatten them up before cooking and eating them.

Notice how Morpurgo makes the spurious suggestion that Shakespeare intended the character of Shylock to represent all Jews — not just one particular unsavory example.

The works of Shakespeare are populated with all kinds of evil “gentiles” — but no one ever is concerned that Macbeth is “anti-Scottish” or “anti-woman”.

What Jews fail to understand about The Merchant Of Venice is that it is a Christian cautionary tale of mercy, charity and forgiveness — and the character of Shylock is much like the Pharisees in the Bible who stubbornly insist on adhering to the letter of the law — for which Christ rebukes them.

And it should be pointed out that at the time that The Merchant Of Venice was written, Jews had already been expelled from England for 300 years — for their usurious banking practices and abducting and murdering Christian children for their blood rituals.

We can only wonder how the Jews today would feel if Shakespeare had chosen to write a play about Jewish ritual murder — as Geoffrey Chaucer did in the “Tale Of The Prioress” in his Canterbury Tales.

Perhaps instead of censoring Shakespeare for writing about a Jew in an unflattering way, the Jews would do well by acknowledging their history of engaging in usurious banking — and renouncing it.

Instead of gaslighting White Christian nations by denying their well-documented participation in ritual murder, they should acknowledge it — and renounce it.

But that will never happen because Jews would rather falsely portray themselves as the eternal victims and attack anyone who dares criticize them for their own moral edification.