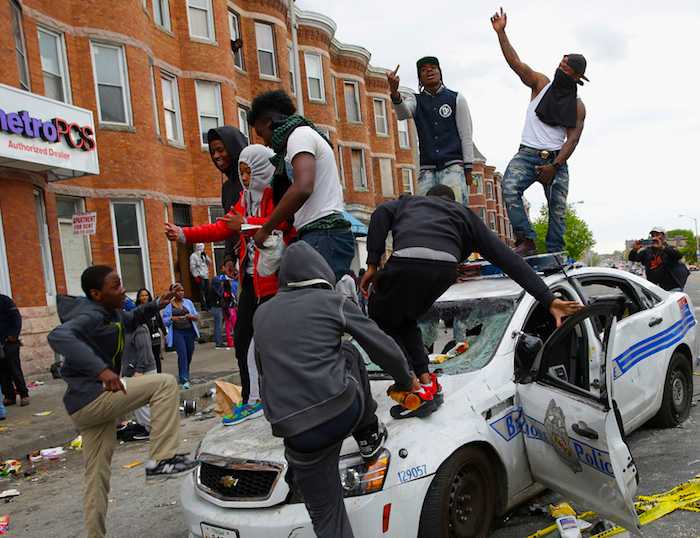 A new study by a group of radical social justice warriors is trying to convince us that what we see in front of our very eyes is not actually there — that ‘bad neighborhoods’ aren’t actually dangerous:

The knowledge that we’ve gained since 1982 unequivocally tells us something else: Serious violence is extremely concentrated in very particular places and, most importantly, among very particular people. Dispelling the notion of “dangerous neighborhoods,” extensive research on geographic concentration has consistently found that around half of all crime complaints or incidents of gun violence concentrated at about 5 percent of street segments or blocks in a given city. Moving past “violent communities,” sophisticated analysis of social networks have demonstrated that homicides and shootings are strongly concentrated within small social networks within cities—and that there is even further concentration of violence within these social networks.

For example: In Chicago, a city often used in the media and elsewhere as an example of the worst of American urban violence, researchers found that a social network with only 6 percent of the city’s population accounted for 70 percent of nonfatal gunshot victimizations. Violent crime isn’t waiting to happen on any given block of a poorer neighborhood, nor is it likely to arise from just anyone who happens to live in one.

While violence is concentrated in very particular places, it’s not the places themselves that are committing homicides.

And, despite claims to the contrary about upticks in violence associated with the “Ferguson Effect” or “ACLU Effect”—reductions in street stops when police have opted to, or have been forced to, change enforcement practices—massive levels of low-level enforcement does not produce public safety. In fact, such policing can make communities less safe by pushing people away from formal means of resolving disputes and towards private forms of violence. So how can we explain the nature of serious urban violence?

At the American Society of Criminology’s annual conference, my colleagues and I at the National Network for Safe Communities at John Jay College recently presented evidence of what many in the violence prevention field have known for a long time, but has yet to become the public common sense. In our forthcoming study of serious violence in over 20 cities, we found that less than 1 percent of a city’s population—the share involved in what we call “street groups” (gangs, sets, and crews)—is generally connected to over 50 percent of the city’s shootings and homicides. We use “group” as a term inclusive of any social network involved in violence, whether they are hierarchical, formal gangs, or loose neighborhood crews. In city after city, the very small number of people involved in these groups consistently perpetrated and were victimized by the most serious violence.

…Rather, to understand violence, our research points again to the context, norms, and dynamics of street groups. Street groups involved in violence are generally composed of young men of color living in communities with long histories of structural discrimination and alienation from state institutions, particularly law enforcement. These areas have generally suffered from both over-enforcement and under-protection. Intrusive, broken-windows-style policing means mass stop-and-frisk interactions, along with tickets and arrests for minor offenses—but it doesn’t come with an equivalent investment in preventing or solving offenses like homicide. Indeed, it often makes it harder to do so, thanks to the cycle of mistrust between police and community members. The near-total impunity for homicides and shootings in distressed communities signals that the state can’t or won’t actually protect people from the most significant harm.

Where that’s true, people feel the need to protect themselves and settle disputes through other means, including private violence. Street groups offer the perception of safety, but tend to embed norms and behaviors that produce violence and put group members at even more risk. Those norms include the use of violence to defend status and solve disputes, the presence of gun carrying, and cycles of retaliation. Being involved with a street group makes people more likely to be both a perpetrator and a victim of serious violence. It’s not a surprise that groups are disproportionately connected to the total violence in a city—violence is acted out by people within a context of alienation from formal public safety systems and who face a very real fear of victimization.

Liberals love to steer any discussion about crime toward “economics” and “opportunity” and “victimization”.  But as this article itself freely admits, what makes a neighborhood “bad” is “people of color” also known as “Blacks”.  To say that there is no such thing as a “bad neighborhood” is the equivalent of saying there is no such thing as Black people.  But one thing is certain, there would be no “bad neighborhoods” in America — or in any White country — if there were no “people of color” in those countries.

And one of the greatest lies that liberals have ever told is that poverty causes crime.  If that were true, then White and Black neighborhoods with the same income levels would have similar crime rates, and they do not — not by a long shot.  Poor White areas are relatively safe compared to even middle class Black neighborhoods.  What makes a neighborhood (or country) good or bad is the quality of people in it, not the buildings or the police who patrol the streets.  That’s why the worst neighborhoods anywhere are enriched by people of “color”.