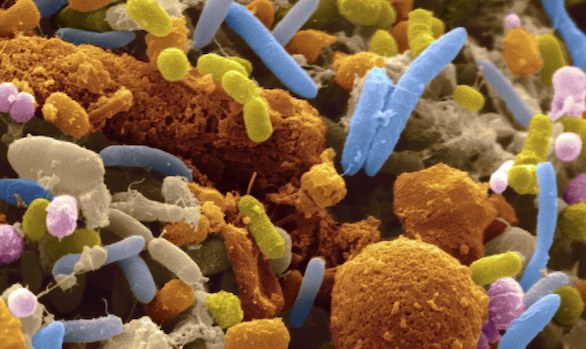 A new study out of the University of Minnesota published in the journal Cell concludes that the standard American diet destroys the bio-diversity of the gut microbes of new immigrants, which results in increased risk for many diseases:

A study published this week in the journal Cell follows multi-generation immigrants from Southeast Asia to the United States. As they moved, their microbes responded. Once in the United States, the immigrants’ gut diversity dropped to resemble the less-varied microbiomes in European Americans. At the same time, obesity rates spiked.

“We found that moving to a new country changes your microbiome,” said Dan Knights, a computational microbiologist at the University of Minnesota and an author of the paper. “You pick up the microbiome of the new country and possibly some of the new disease risks that are more common in that country.”

In the United States, immigrants in the study ate foods richer in sugars, fats and protein. Microbiomes changed within months of moving. “People began to lose their native microbes almost immediately after arriving in the U.S.,” Knights said. “The loss of diversity was quite pronounced: Just coming to the USA, just living in the USA, was associated with a loss of about 15 percent of microbiome diversity.”

Obesity rates among many of the study immigrants increased sixfold. Those who became obese also lost an additional 10 percent of their diversity. “And the children of immigrants,” Knights said, “had yet again another 5 to 10 percent loss.”

As microbial diversity decreases, the risk of diseases such as obesity and diabetes increases. “It’s been known from previous studies that people in developing nations tend to have more gut microbiome diversity and lower risk of metabolic diseases,” Knights said. “It was also known that moving from a developing nation to the U.S. increases your risk of those diseases.” But no one had tested whether the microbiome changed after immigration, too.

“The association made between changes in dietary factors, toward a more ‘Westernized’ nutritional diet, and the loss of bacterial diversity” was “particularly striking,” said Eran Elinav, who studies the human microbiome at the Weizmann Institute of Science in Israel. (In 2014, Elinav and his colleagues reported that traveling to distant time zones by plane alters the microbiome, as though the germs were jet-lagged.)

But changes in diet were slower than changes in microbiome, suggesting factors beyond American food were at play. “We found that diet alone wasn’t enough to explain the rapid Westernization of the microbiome,” Knights said — differences in drinking water and antibiotics possibly contributed as well.

The new study supports hypotheses that Western lifestyle influences the microbiome. Industrialization is correlated with a drop-off: Indigenous South American people, for instance, have about twice as many species in their guts, compared with a person in the United States.

But what effect does Third World diversity and immigration have on the native White population?  That seems like it would be a deserving subject for a major study by a U.S. research team, but that will never happen because they are far too concerned about how the U.S. — and White people in general — can be blamed for everything that goes wrong with non-Whites, including the bad food choices they make when they move here on their own free will.

And if “diversity is our strength,” why is just living in the U.S. destroying the diversity of gut microbes in immigrants?  This study makes it abundantly clear that Third Worlders would be much better off health-wise if they simply stayed in their native countries and preserved their native gut “bio-diversity,” but of course that is not the logical conclusion of the study.  If they were truly concerned about maintaining native “diversity,” they would do everything they can to keep the different races separated in their unique bio-spheres.  Forcing them together creates disease — for everyone.