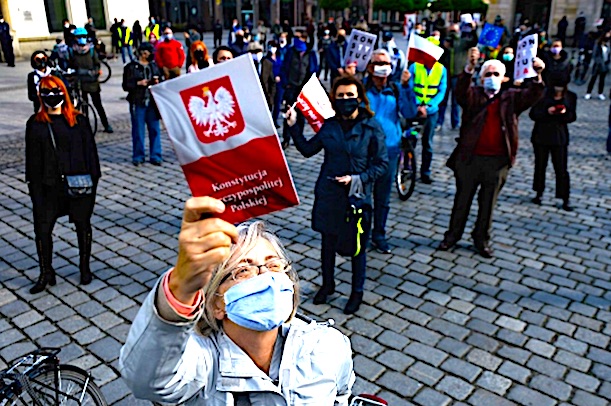 Only just over half of Poles (56%) say they would take a vaccine for COVID-19 if one were available, a global survey by Ipsos on behalf of the World Economic Forum has found:

That puts Poland second from bottom among the 27 countries included in the study, alongside Hungary (56%).  Only Russia (54%) came below them.

Globally, 74% of adults surveyed said they would take the vaccine. The countries with the highest proportion of positive responses are China (97%), Brazil (88%) and Australia (88%).

In a separate survey conducted in Poland by SW Research for Rzeczpospolita in July, just under half of Poles (47%) said that they would use a vaccine if one became available.

In the latest Ipsos study, among Poles who said they did not intend to take the vaccine, the most common reason – chosen by 65% of them – was that they were worried about side effects.

Almost half (44%) said they did not think the treatment would be effective, while 18% said they were opposed to vaccines in general.

Poland, like many countries, has seen a growth in anti-vaccine sentiment in recent years.  The number of people refusing compulsory vaccinations grew thirteenfold in 2008-18, reaching 40,151 in the latter year, and the proportion of children being vaccinated against measles has fallen below the 95% threshold required for herd immunity.

Last year, Poland recorded 1,423 measles cases – the fourth highest number among EU member states and more than in the previous 18 years combined. Many cases were found among immigrants from neighbouring Ukraine, leading the government to consider an entry ban on unvaccinated foreigners.

Antivax groups have been present at anti-lockdown protests in Poland during the coronavirus pandemic. A “Stop the Plandemic” demonstration in the city of Poznań on Saturday was led by Justyna Socha, who in 2018 fronted a successful effort to gather the 100,000 public signatures necessary to submit a legislative proposal to parliament that would ban compulsory vaccinations.

Socha is a parliamentary assistant to MP Grzegorz Braun, one of the leaders of the far-right Confederation (Konfederacja). Braun has been present at anti-lockdown protests, including one in Berlin at the end of August, which Socha also attended.

During Poland’s recent presidential election campaign, incumbent Andrzej Duda declared that he was “not a supporter of any kind of obligatory vaccination”. Following criticism, he clarified that he was referring only to a potential coronavirus vaccine, and not to vaccinations in general.

The self-admitted Jewish-controlled press habitually portrays those who oppose the useless lockdown or the dangerous corona vaccine as Far-Right extremists, Nazis and dangerous antisemites — which is exactly how they characterize Poland in their press coverage.

Not surprising, considering that Poland is ultra nationalistic, anti-communist, anti-immigrant, and pro-Christian — everything the Jews hate.

Surveys in America show that people who oppose mass vaccination tend to be highly educated and White — both Liberal and Conservative, cutting across the political spectrum — which makes it harder for them to argue that their opposition to vaccines is born out of ignorance or a lack of education.

And the Poles know that the mass vaccination plan for the manufactured conorona crisis is a vehicle to usher in communism across Europe — and the Poles want no part of that having endured it for over 70 years already.

There is also a correlation between Poland being the most avowed Christian country in Europe and also the most resistant to mass vaccination — Christians are less likely to go along with what the rest of society is doing, especially if that society is perceived to be atheist and anti-Christian.

The most Christian society in America — the Amish — do not accept vaccines.

And if a survey were taken among so-called “antisemites”, no doubt 95% of them would probably not be inclined to take the corona vaccine anytime soon.