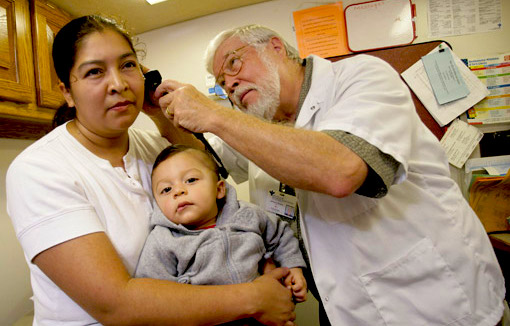 Under the guise of being a “cost-saving measure,” New York City has announced that it will now offer comprehensive free health care services to the city’s estimated 300,000 illegal migrants who live there:

The comprehensive health care plan unveiled by New York City Mayor Bill de Blasio this week drew applause from the Democrat’s supporters but also skepticism from those in the city who question the value and cost of the effort.

“This is the city paying for direct comprehensive care (not just ERs) for people who can’t afford it, or can’t get comprehensive Medicaid – including 300,000 undocumented New Yorkers,” Eric Phillips, spokesman for de Blasio, boasted on Twitter.

State Assemblywoman Nicole Malliotakis, a Republican representing parts of Brooklyn and Staten Island, criticized the proposal as an example of de Blasio using city coffers “like his personal ATM.”

“How about instead of giving free health care to 300,000 citizens of other countries, you lower property taxes for our senior citizens who are being forced to sell the homes they’ve lived in for decades because they can’t afford to pay your 44 percent increase in property taxes?” she said.

Seth Barron, associate editor of City Journal and project director of the NYC Initiative at the Manhattan Institute think tank, noted that the city’s uninsured, including undocumented residents, can receive treatment on demand at city hospitals. The city pays more than $8 billion to treat 1.1 million people through its New York City Health + Hospitals program, he wrote.

Barron said the mayor is simply trying to shift patients away from the emergency room and into clinics. He said that dividing $100 million by 600,000 people comes to about $170 per person, the equivalent of one doctor visit…

…The mayor’s plan has plenty of support. Mitchell Katz, president and CEO of NYC Health + Hospitals, said the plan will help his agency “give all New Yorkers the quality care they deserve.” State Sen. James Sanders Jr., who represents parts of Queens, said he looks forward “to seeing the Care NYC program grow and prosper as it helps to create a healthier New York.”

No surprise that the Jew Mitchell Katz, who controls NYC’s health and hospitals, believes that illegal migrants “deserve” free comprehensive health care which working class New Yorkers cannot afford, nor have access to.  The only thing that illegal migrants “deserve” is a one-way bus ticket back to Mexico, along with a promise that they will be shot on sight if they attempt to illegally cross the border again.  Only in the mind of someone intent on destroying a nation does an illegal migrant have any rights that legal citizens have.  Those espousing these views should be put on the same one-way bus to Mexico.

What is also remarkable is that stories like this do not illicit massive protests on the streets of New York City along with demands that the traitorous Mayor de Blasio immediately resign.  But considering that the former “Republican” Mayor of New York City, Michael Bloomberg, is to the left of de Blasio on many issues, there is only one acceptable ideology in the City, and that’s radical liberalism, which has systematically driven the White middle class out of the city, to the point where New York City is quickly becoming a non-White proletariat dominated by a jewish wealthy elite, the Kalergi Plan in action.