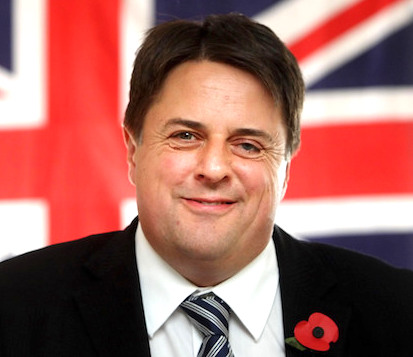 In the accompanying video, Nick Griffin of the British National Party explains how Zionist Neocons offered them much-needed funding in 2007, but in return he was asked to focus on the evils of Islam and never criticize the jewish banking system:

Where they couldn’t buy off established parties, they created their own, hence giving rise to pro-Israel groups like the EDL, Britain First and Pegida.

When Tommy Robinson created the EDL, it was started with its own Jewish section run by Jewish extremist Roberta Moore, who now runs the Jewish Defence League.

This is why there were always Israeli flags flying at EDL rallies.

This is why all ‘new right’ parties are ardent supporters of Israel.

This is why it’s highly doubtful that anything will change for the better with them in power.

The BNP became a ‘hate group’ in the eyes of the jewish-controlled media when it refused to be bought off by these powerful jewish interests.  Clearly, Tommy Robinson had no problem accepting these conditions from his “conservative” jewish backers who provide him with political and financial support only so long as he focuses his criticisms on the “islamification” of England while steering clear of the cause of that “islamification”.  It’s kosher to focus on the symptoms but strictly forbidden to pull back the curtain and discuss the hidden hand pulling the levers of power.

Nick Griffin and the BNP are hardly “extremist” in their views, but that’s how the media portrays them in order to make Tommy Robinson’s EDL seem like the voice of reason.  England has adopted the working definition of antisemitism to include any criticism of Israel, which suits Tommy Robinson just fine, as he is on record as stating, “I am a Zionist.”  Any political figure in England who isn’t pro-Zionist is an antisemite and portrayed as a ‘pro-Muslim’ sympathizer, like Nick Griffin.   You’re either with the Jews or against them.