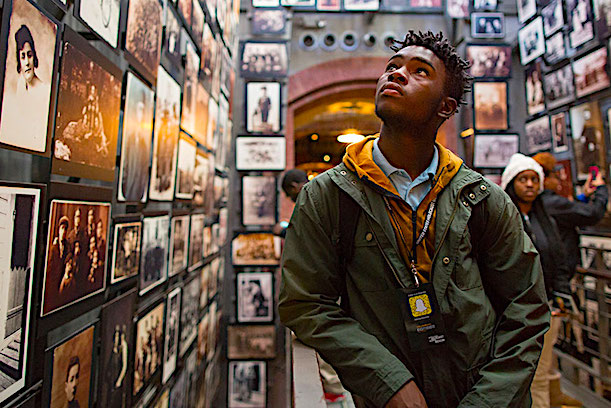 Ruth Wisse, a professor of Yiddish at Harvard — that bastion of Jewish learning — has written an essay for the philo-semitic journal National Affairs on the perils of liberal Holocaust education programs which universalize Jewish suffering — thus trivializing it by removing that suffering from its larger historical context — which undermines its intended goal of reducing ‘antisemitism’ and the age-old “war against the Jews”:

This reasoning — that hate groups promote hate and that studying the Holocaust will prevent hate — prompted the establishment of the Holocaust Museum in 1980 and continues to undergird Holocaust education in all its facets.

…But is there any evidence that Holocaust education decreases hatred of the Jews among those Americans who are susceptible to it? In reality, anti-Semitism in the United States has spread in tandem with increased teaching about the Holocaust. And there is really no sound theoretical underpinning for this expanding educational initiative. Societies that concentrate on their self-improvement generally rely on positive instruction and reinforcement…

Already 30 years ago, in a Commentary Magazine article titled “How They Teach the Holocaust,” noted historian and intellectual Lucy Dawidowicz raised serious concerns about the distorted curricula and questionable outcomes of Holocaust-related projects like Facing History and Ourselves. Consulted as an authority on what she called the “war against the Jews,” Dawidowicz undertook a thorough study of these materials, leading her to question the wisdom of encouraging “oppression studies” in the absence of any robust teaching of history. Essential reading for anyone approaching this subject, her study identified problems ranging from the failure to suggest that anti-Semitism had any history before Hitler to teaching American children raised in unprecedented freedom and permissiveness that “obedience to the law is not necessarily the determinant of a moral person.” What’s more, Holocaust education is routinely appropriated for activist agendas.

…The decisive Allied victory made right-wing anti-Semitism so out of fashion in America that villainy has been portrayed in Nazi uniform ever since….

The idea of Protestant, Catholic, and Jew came into fashion as the ecumenical model of religion in America…

These developments, in time, transformed the post-war images of the Jew from victim-turned-hero to exploiter and villain. Holocaust education of the time fit anti-Zionism like the protective sheath of a sword.

…[The] potential for corruption begins with the impulse to make the Holocaust a universal symbol of evil, Nazism synonymous with “hatred,” and Holocaust education a redemptive American pursuit.

…The [Holocaust Museum] depoliticized, de-historicized, and universalized a political and historical process to prevent teaching anti-Semitism or the war against the Jews.

…In the early years of planning the [Holocaust Museum] project, Wiesel was defeated in his attempt to keep the focus on anti-Semitism. He eventually quit the Holocaust Museum commission, but without going public about his scruples. He tried to split the difference by saying the “universality of the Holocaust lies in its uniqueness: The Event is essentially Jewish, yet its interpretation is universal.”

This sounds like a liberal version of the Crucifixion. The term “holocaust” means a burnt offering — a sacrifice by fire — and the sacrificed Jews became the secular-liberal version of martyred Jesus who died for the betterment of humankind. Christians believe that the martyrdom and resurrection of Christ are redemptive, but they also erected a religious structure that makes certain demands on its adherents. Liberals imagine the immolation of the Jews as a similar teaching on a larger scale, but as an article of faith with no specific application.

…Yet even the best of students — the ones accepted to places like Harvard — are being forced to learn about the Jews first and foremost as victims of the Nazis. Among those being introduced to Jews in this form are many American Jews who have no other Jewish education, and certainly none as dramatic as this federally supported curriculum.

Historically speaking, Jews are demonstrably the opposite of victims — they are builders, creators, innovators, facilitators, perpetually adaptive, the model of entrepreneurial resilience under circumstances beyond imagining.

…The perversity of teaching about the Holocaust rather than American and Jewish struggles for freedom extracts the wrong lesson from a horrifying precedent.

…Many docents, teachers, and others involved in this project obviously trust that Holocaust education will protect Jews — and “other threatened minorities” — from harm.

…The liberal conscription of the Holocaust as a moral exemplum was misguided from the start, and as presently conceived, it conceals rather than confronts anti-Jewish aggression, falsifies both the nature of anti-Jewish politics and the nature of the Jewish people, advances political causes under false pretenses, and cultivates identification with victims rather than with the soldiers who protect and, if necessary, liberate the victims.

…As the biblical story of the Exodus has inspired other oppressed peoples to gain their freedom by demanding, “[l]et my people go,” the passage of the Jews from Holocaust to Homeland can teach how a people wins and maintains its freedom.

This is the education we need — an education whose meaning is universal. It will take time to revise thinking on this, so we had better begin now.

Just as the Jews have insisted on making World War II about Jews and their “unique” suffering — by creating the false narrative of the “Holocaust” — they now bristle at the idea that they have to share center stage of this myth with other marginalized — and victimized — groups, especially Blacks who suffered under slavery.

But Wisse reveals here is rather remarkable — she is claiming that the power of the “Holocaust” narrative cannot be taken out of the context of a larger Jewish myth — that they are the Israelites of the Exodus — God’s chosen people.

And it is this false identity that she and many other Jews now demand be taught in schools and history classes along with so-called “Holocaust” education.

What she fails to understand is that Christianity was undermined by the same Jewish tendency to universalize the suffering of Christ and offer salvation to the entire world, rather than just to the Israelites for whom he came and died to redeem.

The ersatz suffering of the Jewish people at the hands of the “Nazis” cannot — and will not — replace the suffering of Christ as the foundational narrative of our western culture and civilization — despite their best attempts to do so.

And Holocaust education will fail to stem ‘antisemitism’ not merely because it universalizes Jewish suffering but rather because it’s based on a monstrous lie — and that’s a cold, hard fact that some Jews have been willing to confront — and that this Harvard professor of Yiddish lacks the moral courage to even acknowledge.

And that’s why all efforts Jews make to reduce antisemitism have the opposite effect — it’s a house of mendacious cards that will not stand.