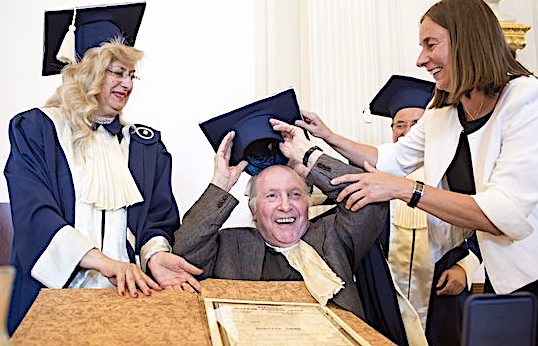 Viktor Orban’s conservative party in Hungary is implementing many changes to the national curriculum to make schools more competitive and more line with Hungarian national values, but apparently that means dropping books by the only ‘Hungarian’ writer to ever win a Nobel Prize, Imre Kertesz, a jewish ‘Holocaust’ survivor:

The new amendment to Hungary’s national curriculum (NAT) has finally been accepted. The government is positive that the changes will grant “Hungarian youth to rise among the world’s best by 2030.” However, many critics of the amendment say there are serious problems with the new curriculum, especially with the humanities which they think are too ideologically driven.

The amendments to Hungary’s national curriculum have been finalized and will incorporate the most efficient international practices along with Hungarian values and traditions, Human Resources Minister Miklós Kásler announced in a press conference on Friday, MTI reports.

Kásler said the curriculum aims to provide the same opportunities to all children, regardless of where they live and of their social status.

…Also, family education and patriotism will play a more prominent role than before, while a civic education class is also being introduced as a new subject in the eighth and twelfth grades.

…There are also new figures of world literature such as Bohumil Hrabal, García Márquez, Daniel Defoe, Tonke Dragt, Antoine de Saint-Exupéry, George Orwell, and Agatha Christie. There are no popular contemporary authors, however, even though at some point the inclusion of Harry Potter books was suggested.

It is also somewhat surprising that the work of Imre Kertész- who is the only Hungarian Nobel Prize winner in literature- is no longer part of the compulsory writers.

Kertész’s novel Fateless, a fictionalized account of a 15 year old’s experience in three different German concentration camps, was published in 1975 and soon became mandatory reading in public high schools in Hungary.  It was also made into a feature film in 2005.

Nobel Prize-winning authors are usually a source of national pride, and their books are widely read in schools, so dropping Kertész’s book is an unmistakable blow to his prestige and perceived value to Hungarians — real Hungarians.

But then again, the book is stale anti-gentile jewish atrocity tripe akin to Jerzy Kosinski’s plagiarized WWII novel The Painted Bird, and serves to undermine and negate Hungarian Christian and national values, and that is why it has, no doubt, been dropped from the curriculum.

It is a telling fact that the two most famous books about the Holocaust — the Diary Of Anne Frank and Eli Wiesel’s Night — are both works of fiction which are taught as fact, a perfect metaphor for the Holocaust as a whole.

The same is true with Kertész’s Fateless, which people argue is auto-biographical despite the fact that Kertész himself has denied it.

Ironcially, every book ever written about the Holocaust is fiction except for those written by historical revisionists.