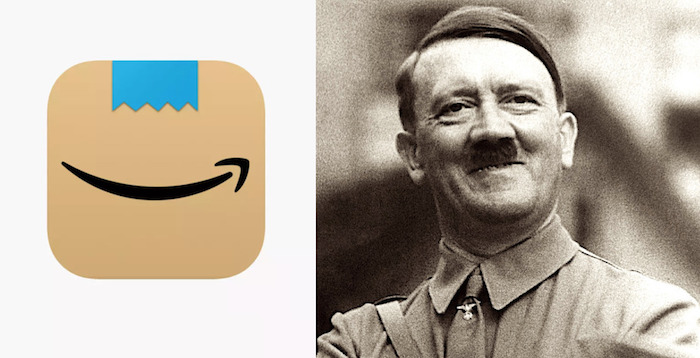 Some Jews apparently were in for the shock of their lives when they recently received packages from Amazon only to be greeted by a cleverly disguised portrait of Adolf Hitler hidden in the new corporate logo:

Amazon has drawn some Fuhrer fury — over a logo featuring a cardboard box and a piece of tape.

The ecommerce giant released a new logo for its smartphone app on Monday after some users compared the former logo to Hitler’s mustache.

The former logo featured a piece of tape with ragged edges above the company’s trademark curved arrow to mimic a taped-up cardboard box. But users said the juxtaposition brought images of Hitler to mind, with the tape as his mustache and the arrow as his mouth.

The new logo ditches the ragged tape edges. An Amazon spokesperson only commented to outlets on the new design.

“Amazon is always exploring new ways to delight our customers,” the spokesperson said. “We designed the new icon to spark anticipation, excitement, and joy when customers start their shopping journey on their phone, just as they do when they see our boxes on their door step.”

Clearly, Amazon has a bunch of Nazis working in their design department who take glee in taunting and terrorizing Jews — how could they not see that logo is clearly a dead ringer for Hitler?

Since the end of World War II, Jews have been subjected to one of the most elaborate, terrifying psy-ops the world has even known — they have been convinced through relentless propaganda in the media that the Germans somehow systematically murdered 6 Million™ Jews for no reason whatsoever except for the fact that they were Jews.

This was done so that elite Jewish supremacists — and extreme Jewish nationalists — could justify the theft and then ethnic cleansing of the Palestinian people who had the misfortune of occupying that land for the last 1,500 years.

This “Holocaust” proved to Jews — and the world at large — that Jews needed a “safe space” where they could go to — to escape persecution or even prosecution — and live without fear of ever being rounded up and put in gas chambers disguised as showers ever again.

This psy-op has indeed been wildly successful, but it’s come at a dear cost to the average Jew who is now constantly haunted and “terrorized” by the specter of seeing evil Nazis symbols literally in every woodpile.

They see Nazi-related images in random paint splotches, hot cross buns, baseball hats, and even household pets — and they believe these are all intentional — to psychologically torture and humiliate them — to make sure they never forget that they are Jews.

Luckily, some Jews have successfully broken the spell of this brainwashing and tried to warn their fellow Jews of the truth — that the “gentiles” really have no interest in killing them for no reason — let alone murdering them on an industrial scale.

And one would think that Jews would welcome this good news — that the world is not nearly as hostile of a place as they’d been led to believe — but unfortunately the opposite is the case — if you try to tell them that the “Holocaust” wasn’t real, they think you “hate” them and want to kill them — a real Catch-22, to use a Jewish phrase.

In fact, they’ve used their power to enact laws to have you thrown in prison if you try to tell them — or anyone else — that the world doesn’t hate them as much as they think it does.

And until this nefarious spell is broken, we will continue to see many more of these Nazi-in-the-woodpile stories.