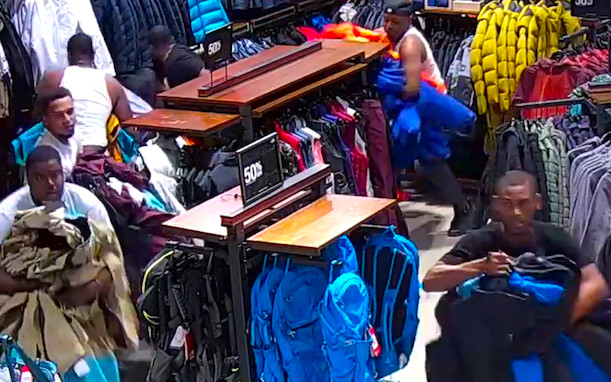 Police are looking for what has been characterized as a “flash mob” of 10 Black males who entered the North Face store at Pleasant Prairie Premium Outlets in Wisconsin on Monday, taking more than $30,000 in merchandise from the business:

The incident happened at 7:45 p.m. Monday at the store at 11601 108th St., Suite 577, when “10 black males entered the store and each grabbed as much merchandise as they could carry before running to the cars and leaving the property,” said Sgt. Aaron Schaffer of the Pleasant Prairie Police Department. Items included jackets and other articles of clothing. There was no physical confrontation.

Schaffer said the suspects, who remain at large, were in the store for approximately 20 to 30 seconds before fleeing the scene.

The theft occurred about an hour before the store’s regular closing time.

Since the so-called Civil Rights Movement in the 1960s and the enactment of LBJ’s “Great Society,” Blacks collectively have received over a Trillion dollars in welfare payments and government grants and set-asides, not to mention affirmative action mandated government jobs for which they were rarely qualified.  These programs were essentially a gift to Blacks from the working White middle class as a way of saying, “Sorry about the slavery thing, even though 97% of our ancestors had nothing to do with slavery and a million of our ancestors died in a war over it, but we hope this helps.”

All that this noblesse oblige did was create inter-generational, permanent underclass that will be dependent on government handouts as long as there continue to be taxpayers to foot the bill.  And for the past 50 years, Blacks have been told they still haven’t been “paid back” for their ancestors being slaves, so now they are entitled to one big lump sum payment in cash to spend however they want.  Reparations will not magically turn Blacks into law-abiding, productive citizens (i.e., White people), nor will it work as “shut up” money, as the more they receive, the more they will demand.  Or perhaps we can just decriminalize shoplifting, as Dallas has essentially done, as an indirect business tax in lieu of reparations.