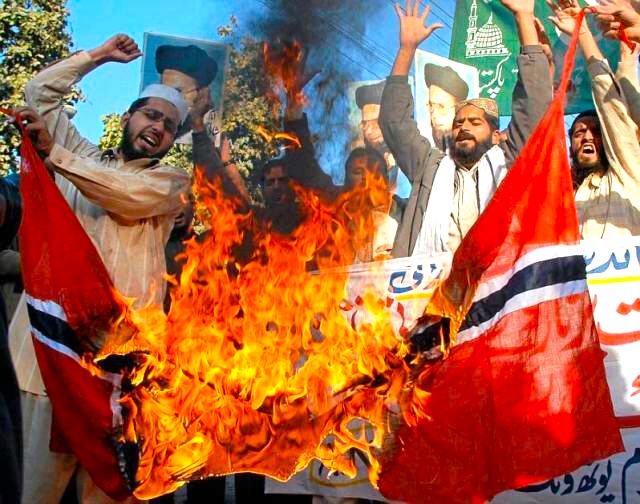 Due to the high numbers of African and Muslim migrants dependent on public welfare, Norway has announced a new plan to force them to learn the Norwegian language or risk losing benefits:

In 2017, the Norwegian state paid out NOK 6.6 billion ($770 million) in social assistance, with half of the recipients being immigrants. Of them, 86 percent were immigrants from Africa and the Middle East.

Solberg stressed that today an “activity requirement” is in place to incentivise people under the age of 30 to seek employment. According to her, the “language requirement” serves a similar goal. Solberg also warned of the detrimental effects of inaction.

“You must remember the mechanism that get triggered when you spend a long time on social assistance. You lose confidence and inspiration to do something about your life”, Solberg stressed. According to her, mastering Norwegian is a crucial way of getting back on track to enter the labour force.

Solberg stressed that the demands on people to participate in learning Norwegian will be implemented some time in 2020. At the same time, she stressed that the authorities will provide assistance with child rearing and other problems that may deter people from mastering the language.

“One must work on integration from day one. Teaching Norwegian is actually the top priority”, Solberg said, stressing that Norway has placed higher demands on new arrivals in the past 15 years, while also providing a better offer.

Earlier this month, Solberg’s party colleague and Labour and Social Affairs Minister Anniken Hauglie voiced her concern over the number of unemployed immigrants.

“I am worried that too many immigrants are out of work and are passive welfare recipients. This cannot be good either for the individual or for society”, Hauglie said, as quoted by the Aftenposten daily newspaper.

However, the step announced Norway’s centre-right government was met with criticism from the opposition. Socialist Left Party immigration spokesman Karin Andersen called this measure “embarrassing” for a government “that cuts the Norwegian classes” and “reduces women’s social assistance”. Andersen ventured that Solberg was “wagging her finger” at the most disadvantaged and using threats rather than providing opportunities. According to her, offering high-quality courses in Norwegian would be a preferred way to go.

“Social assistance is emergency aid. They can’t deprive people who don’t have money of food help. Does [Solberg] believe that those who cannot speak Norwegian and are old and sick should rather starve?” Andersen asked rhetorically, suggesting that Solberg’s government has crossed “yet another limits of rule of law and decency”.

Previously, Norway’s fellow Scandinavian country Denmark tested a similar approach, as Danish Integration Minister Inger Støjberg pledged to make immigrants pay for their own interpreter in order to incentivise them to learn the language.

According to Statistics Norway, there are over 130,000 recipients of social assistance in a country of 5.2 million. In 2017, there were over 880,000 people of foreign background in Norway, constituting about 17 percent of its population.

There’s nothing “conservative” about forcing Arabs and Africans to integrate into a White society, no matter how this plan is characterized.  A true conservative would kick them all out of the country and ban any of them from re-entering.  A true conservative would understand that non-Whites are vastly over-represented on the welfare roles of every White country, regardless of whether or not they can speak the host language.  Blacks in America, for example, all speak English, but that hasn’t deterred them from choosing a life of generational welfare.

And do Norwegians really believe that any migrant who refuses to learn Norwegian is going to be kicked off welfare?  All of Norway’s jewish “human rights attorneys” will be slapping the government with hundreds of lawsuits to stop such “racist” and “discriminatory” policies.  Even in America, it has become politically-incorrect to demand that refugees “speak English,” so how does ultra-liberal Norway expect to get away with this nonsense?  And why would they want Muslims to “integrate” in the first place?