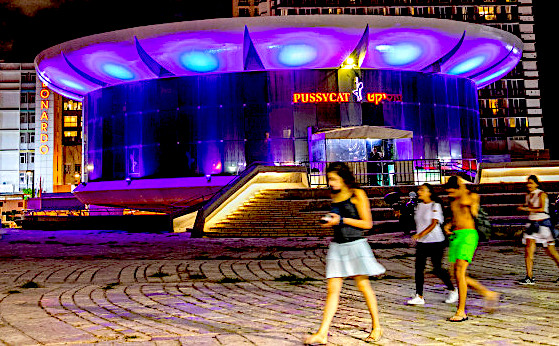 For years, the round mirrored building overlooking the Tel Aviv Marina embodied Tel Aviv’s well-deserved reputation as the Middle East’s capital of sin, decadence, and moral depravity, but now it is being transformed into a new center of “jewish values”:

Sandwiched between the Sheraton and the Hilton hotels on some of the priciest real estate in Israel, the building on Atarim Square was home to the Pussycat, an upscale strip club popular with the rich and powerful…

But the club closed down this summer following a legal fight, leading to its radical transformation into a hub for Jewish learning and social activism. The building that allegedly was a venue for prostitution and sex trafficking will now serve as a center for activism aimed at, among other things, empowering women from troubled backgrounds.

“[This is] first and foremost a great opportunity for tikkun,” said Yakir Segev, a well-known social activist, using the Hebrew word for “repair.”

…Underground, the club had two windowless bedrooms with shower stalls. Police said those rooms, which echo with the drone of overhead traffic, were where strippers also working as prostitutes would take clients.

“We’re not hiding what this place used to be,” Segev told the Jewish Telegraphic Agency. “On the contrary, we want to build on it and use its symbolism. In a place that stood for exploitation, there will be assistance and empowerment to women.”

The repurposing of Atarim Square is, to some observers, part of a broader change in Tel Aviv, which is shedding its reputation as a hedonic paradise and becoming more family friendly and embracing of Jewish tradition.  The building that once housed the Pussycat has been transformed into a hub for Jewish learning and social activism.

A decade ago, Israel was a focus of international criticism as a center of sex trafficking, much of it centered in Tel Aviv. In 2005, the country was added to a U.S. State Department human trafficking watch list.

But by 2012, Israel had turned things around. The State Department had elevated it to the highest rating of countries working to combat trafficking. Israeli police cleaned up the streets around the old central bus station, which had become a haven for pimps and prostitutes.

In 2017, following pressure from women’s rights groups and religious residents, the Israel Police recommended prosecuting the Pussycat’s owners for running a brothel there, though the owners denied it. Ultimately, prosecutors decided not to indict them, citing a lack of evidence.

…“The Pussycat was a relic from the 1990s,” Igal Zeevi, a tour guide specializing in Tel Aviv, told JTA. “Back then, you could find brothels and strip clubs on every street corner in central Tel Aviv. That sort of thing doesn’t exist anymore.”

…Segev said the space will be used for studying Jewish texts, holding activities and lectures, and providing training for at-risk groups, including women.

Since prostitution, human trafficking, sodomy and pedophilia are jewish “values”, there’s really no transformation or “repair”  needed here.  Israel is merely cleaning up its international image because the Jews don’t want to disrupt their gravy train of duped evangelical Christians who spend tens of millions of dollars each year on guided tours of the “holy land”.

Make no mistake, though, the human trafficking will not just disappear from Israel but will simply be relocated to another district of Tel Aviv that is not frequented by Christian tourists.  Israel with the mask off is actually a modern-day Sodom and Gomorrah, which will not surprise anyone who is familiar with the holiest of jewish books, The Talmud, which in one way or another condones all these activities, depending on the situation.