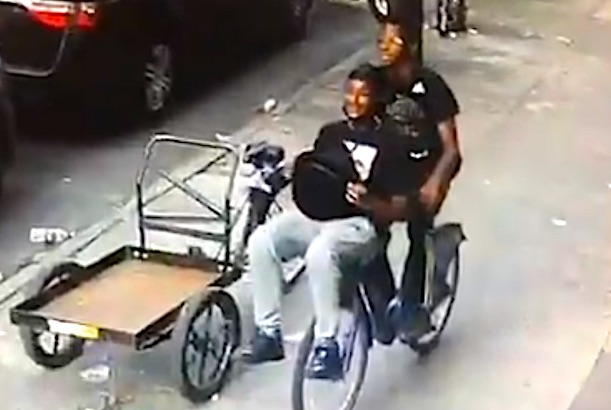 The details of this ‘crime spree’ are intentionally vague, but apparently two Black men in Brooklyn are wanted by police for ‘antisemitic larceny’ because they allegedly stole some articles from some Orthodox Jews in their neighborhood:

The Task Force tweeted on Monday that the suspects were wanted for “antisemitic grand larceny” after “stealing religious items” from four people on Brooklyn’s Bedford Avenue.

The tweet included a video showing the suspects riding a bicycle, one of them holding the type of black hat worn by Haredi Jews.

The NYPD is asking for the public to contact it if they have further information at 800-577-TIPS.

These Orthodox Jews live in crime-ridden Black neighborhoods — and are often slumlords, too — which is going to automatically make them more likely to be robbed or verbally ‘harassed’ — whether they are Jewish or not.

Jews have recently started using the phrase “visibly Jewish” to justify charging anyone who robs or beats them with an additional hate crime.

That’s right, if a Jew is wearing anything on their person to make them identifiable as a Jew — a kippah, a black hat, etc. — then anyone who targets them will also be charged with a hate crime — the assumption being that they are being robbed, not just for money or property, but also just because they are Jews — who are “known to be rich”.

Jews believe that if Blacks who rob them are also charged with Federal hate crimes, then eventually Blacks won’t dare rob any Jew.

But Jews run New York City, and if Blacks aren’t going to “behave themselves”, then they are going to a Federal prison just for stealing a rabbi’s black hat, if that’s what it’s going to take to stop this wave of ‘antisemitism’.