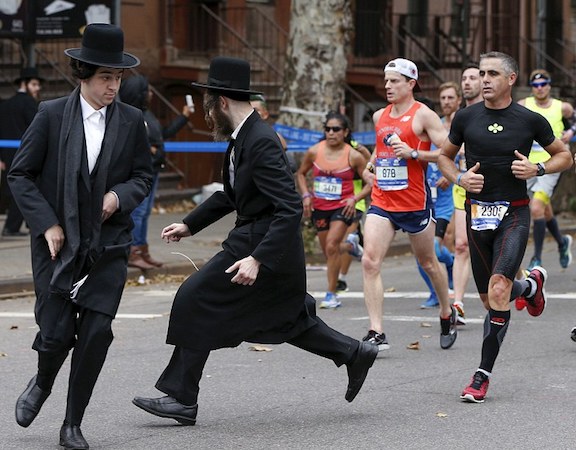 According to New York City Police Department crime statistics, as interpreted through the jewish lens of the self-serving Anti-Defamation League, more “hate crimes” were committed against Jews in 2018 than against all other minorities combined:

Anti-Semitic incidents rose by 22 percent from last year, NYPD figures show, according to a report Wednesday on Patch. Of the 352 hate crimes this year recorded as of Sunday, 183 were anti-Semitic incidents. Brooklyn has seen a spate of hate crimes against Jews in recent months, but the Patch report did not break down the figures by boroughs.

Overall, the tally of hate crimes in New York is up about 6 percent from 331 in the same time last year.

The Oct. 27 slaying of 11 worshippers at a Pittsburgh synagogue by a lone gunman unleashed a spate of incidents in New York and “opened up people even more to act out on these feelings,” Bernstein said. “I think for certain people it gave them (a) green light and that’s what is so concerning.”

The ADL has recorded a 60 percent increase in anti-Semitic assaults this year, according to Bernstein.

Crimes targeting black, white and Asian people also have increased this year, as have those based on sexual orientation, the NYPD figures show. Those categories combined still include fewer crimes than the number of anti-Semitic incidents.

Anti-Muslim incidents dropped by nearly half, according to the same figures. There have been 18 this year, down from 34 last year and 31 in 2016.

When Whites are slaughtered en mass, such as at the infamous Columbine High School in Colorado, when two jewish students, Dylan Klebold and Eric Harris, murdered 13 people, it’s not a “hate crime,” but when any Jew is killed or even called a naughty name, it’s reported to the police as a “hate crime”.  That’s how Jews falsely create the impression that the “goyim” are out to get them, and also how they use these cooked “hate crime” statistics to leverage millions of dollars from our government to protect them from “violent” antisemites, but we never get a cent to protect ourselves from violent minorities.

If we are to take the ADL’s word for it, a whopping 14% of the American public holds “antisemtic” feelings, whatever that means.  Doing the math, the ADL is claiming that there are over 45 million antisemites in America.  If that is true, why aren’t all Jews getting on planes and moving to the safety of Israel?  With 45 million, potentially “violent” antisemites walking the streets, how do Jews even have the courage to leave their own gated communities every day?

The fact is that Jews are cooking these fake statistics to justify the “hate crime” legislation that they’ve already written and want our representatives to sign, which will make criticizing any Jew anywhere for any reason a jailable offense.