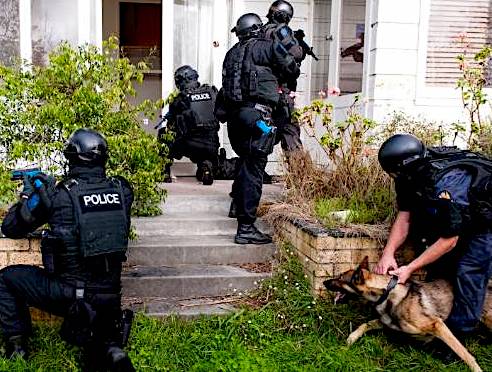 Police appear to be paying close attention to and even visiting the homes of “false flag” conspiracy theorists who spread “bogus narratives” online about the Christchurch mosque shootings:

One Auckland man, who described the March 15 terror attack as a “state-sponsored false flag”, said he had been visited by officers five times since the attack happened.

The man, who described himself as a journalist and online talk show host, said he was no threat.

But a professor of psychology said people spreading “counter-official” narratives could encourage others to violence.

Victoria University professor of psychology Marc Wilson, who has studied conspiracy theories, said there appeared to have been an increase in the popularity and reach of conspiracy theories worldwide since 9/11. The internet made it much easier for people to share theories and find “like-minded” people.

Following the Christchurch terror attack in which 51 people died, conspiracy theories included several claiming the attack was a hoax, or a “false flag” event.

The phrase – which originated in maritime circles when a ship disguised itself with a fake ensign – has become a term used by conspiracy theorists to label events they believe have been faked.

The online talk show host, who Stuff has chosen not to name, said he believed the Christchurch shootings were state-sponsored. “Which state or states at this point were involved remains unclear,” he said.

The man said he could “only hope” he was on a watch list of more than 100 people police have been monitoring since the attack.

The list, which has been seen by Stuff, was created as part of Operation Whakahaumanu and includes white supremacists, Muslim converts and “disaffected” people with firearm licences. Some of the people have come to police attention due to social media posts. Stuff has chosen not to name anyone on the list or contact them for security reasons.

The man said he first received a call from police asking what time his flight to Christchurch was, shortly after he said on his show that he planned to visit the city.

The man claimed police then visited him four times over the next four days before he went to Christchurch where he hoped to interview survivors and witnesses of the attacks, and to film at the Deans Ave mosque.

… Police declined to comment on whether they were investigating or monitoring the man.

There is zero evidence that someone who doubts the official government version of an event is more likely to become violent or incite others to be violent, but that won’t stop so-called “experts” like Marc Wilson from making exactly that claim.  For the past five years, Wilson’s area of “expertise” is the psychology of eating red meat along with studying people who self-harm, but how that translates into being an expert on mass shootings is anyone’s guess.

If the police are interested in promoting conspiracy theories, the best way to do that would be to harass and intimidate anyone who doubts their official version.  After all, the truth doesn’t need laws to protect it unless, of course, we are talking about the so-called Holocaust, and now the shooting in Christchurch, which has seen at least one person jailed merely for sharing a video of the shooting online.  This kind of clampdown is going to naturally create suspicions among the public, not increase confidence in the police.  It’s when people aren’t free to express their opinions that authorities create a climate which encourages violence as an option.