Of 4,000 People In Savile Town England Only 48 White People Are Left 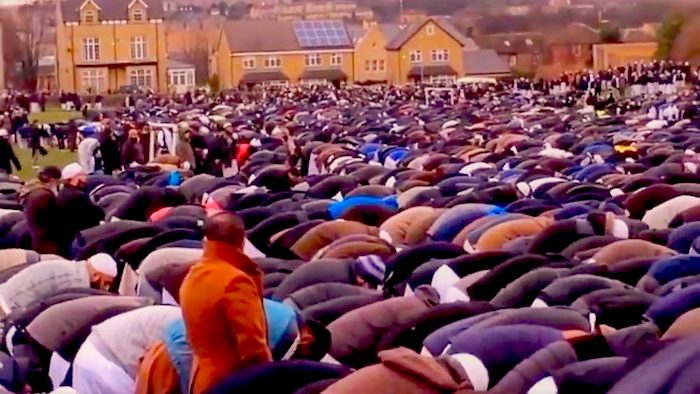 The Muslim invasion and takeover of England is moving steadily onward as small communities like Savile Town have become completely Arab, and Whites have virtually disappeared from the landscape:

Only 48 of the 4,033 people living in Savile Town are white, native British and there’s barely any diversity left in the town as most other residents or from Pakistan or India.

In a documentary style article, the Daily Mail calls Savile Town “one of the most racially homogeneous parts of Britain” as most people have the same culture and are Muslim.

This is not a coincidence as in most places Muslims prefer to live with people from the same cultural backgrounds.

A lot of migrants came to Savile Town to do the low paid jobs in the woollen mills. After a while they opened their own shops for Islamic garment and prayer mats.

Soon pubs were closed and other Western shops with groceries had to close as well. In the meantime a mosque was built for around 4,000 worshippers and the image of the streets changed forever.

“Many Muslim women who live here, speak little or no English… The wives have restricted lives: bringing up children, cooking for families, or going to women-only events at the huge local mosque.

“Many, I imagine, have been brought to the UK to wed the British men of south Asian heritage who have made this area their home, The Daily Mail writes.

According to the newspaper even the lady who sells ice creams in summer wears a burka in Savile Town and young girls are forced to wear Islamic garments, as well.

“Distressingly, every girl I saw — even those of six and seven playing in the park — was wrapped up in a hijab and shoulder-to-toe-gown lest a man glimpse her flesh,” the Daily Mail reporter says.

The development of the town gives a preview on the future: Islam doesn’t bring diversity, it brings a homogeneous society, a society exclusively for Muslims.

This is the true end game of diversity, as the very last White people disappear from towns, cities, and then countries.  No White person is safe living in communities where they are minorities, as they will be targeted for criminal violence and harassment until they have no choice but to leave.  Unfortunately, what has happened here in Savile Town needs to continue to happen all over England and western Europe until the Whites have nowhere else to go, and with their backs up against the wall, they will have no choice but to fight back — and fight they must if England and the rest of Europe is to survive.

Of course, none of this invasion would be happening had the Jews in England not betrayed the English people with their ruinous and subversive multicultural agenda.  When England was 99% White, it ruled most of the world, but now that it’s multi-racial, it doesn’t even rule over its own small towns like Savile.  None of this would have happened if Oliver Cromwell hadn’t made the disastrous decision to allow Jews back in England after King Edward had banned them for 300 years.

England has a Muslim problem because they have a Jewish problem, and that’s what Tommy Robinson is paid to make sure you never find out.