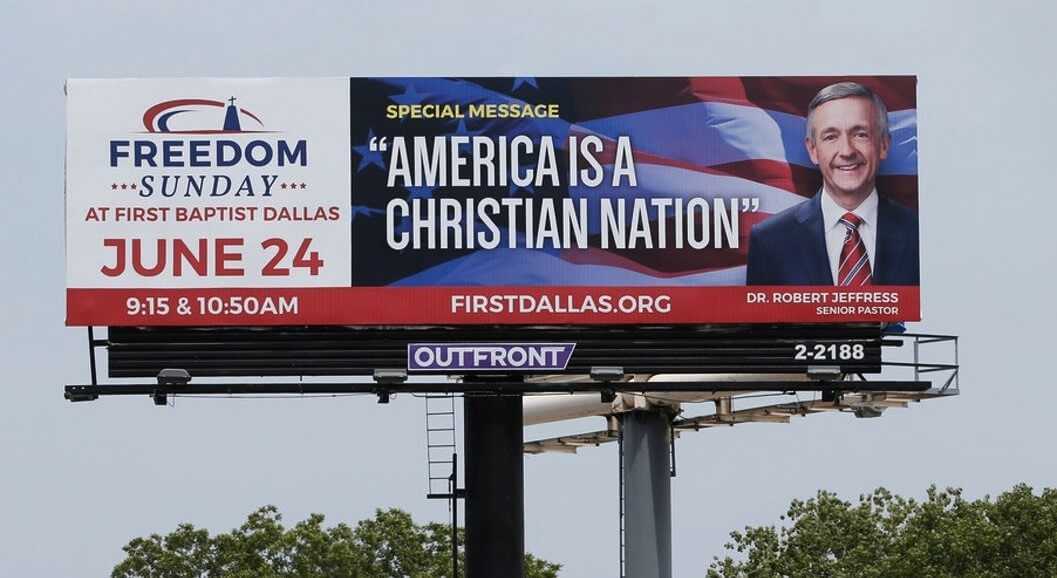 “Billboards promoting a celebration of faith and freedom at the First Baptist Church in Dallas were removed after complaints from Dallas Mayor Mike Rawlings and the Dallas Morning News.

The patriotic billboard campaign included the title of the sermon Dr. Robert Jeffress planned to deliver on June 24 – “America is a Christian Nation.”

“That is not the Christ I follow,” the mayor told the newspaper. “It’s not the Dallas I want to be – to say things that do not unite us but divide us. I never heard those words – that voice come out of Christ. Just the opposite. I was brought up to believe: Be proud of yours, but do not diminish mine.”

Columnist Robert Wilonsky started the controversy with a scathing column on June 7 titled, “First Baptist pastor Robert Jeffress’ gospel of division does not represent my Dallas.”

Wilonsky was apparently triggered by the patriotic billboard while stuck in traffic and suffered a massive microaggression.

“My rabbi warned me there would be days like this,” he wrote. “All I saw Wednesday was someone telling me and everyone else who does not worship Jesus Christ that we do not belong here.”

Comment:
Not surprisingly, this controversy was started by a jew who just cannot accept the fact that he lives in a historically Christian country. The Founding Fathers are on record as desiring America to be a country of Christians and their posterity.