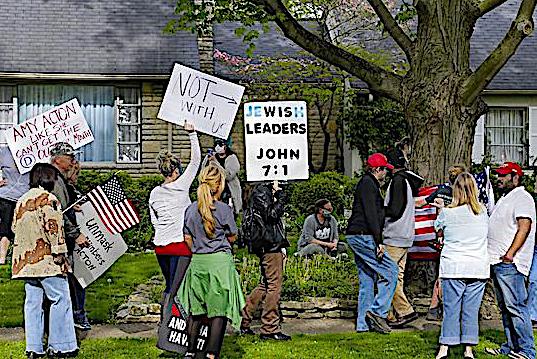 Amy Acton, the Department of Health director in Ohio who came under fire for stay-at-home orders to allegedly stem the over-hyped coronavirus crisis, including by legally armed protesters carrying signs with “antisemitic” messages, has announced her resignation:

Acton, whose resignation was official on Thursday, will become the chief health adviser to Governor Mike DeWine.

Since the start of the coronavirus pandemic, Acton was compared to the Nazis for supporting a reopening plan that included issuing certificates of immunity to businesses, and was called a “globalist,” a veiled anti-Semitic slur, for extending stay-at-home orders in May.

Ohio began lifting coronavirus restrictions in stages on May 4.

Protesters gathered in front of her Columbus-area home on weekends, some carrying guns and shouting slogans or carrying signs bearing anti-Semitic and sexist rhetoric, The Washington Post reported.

“While I’m pleased that Dr. Acton will continue to advise Governor DeWine on health issues, I can’t help but be disappointed by her resignation as health director,” Kenny Yuko, the state Senate’s minority leader, a Democrat, told the Columbus Dispatch. “She endured an incredible amount of unfair criticism, including some anti-Semitic attacks. All those who have insulted, harassed or threatened her and her family should be ashamed.”

Ohio was one of the earliest states in America to reopen after the draconian and unnecessary lockdown, thanks to the protesters who flooded the state capital.

Protesters legally picketed outside Amy Acton’s house — which sent a message to the bureaucrats that they took the illegal lockdown personally — this is why Jews want the Christians of America disarmed.

And, yes, some of the picketers associated Acton’s Soviet-style draconian lockdown rules with her Jewish ethnicity.

Jews, after all, ruled Bolshevik Russia with an iron fist — and oversaw that largest single genocide in world history — so apparently it comes naturally to them once they rise to power.

The above article, however, conveniently fails to mention that one of the protesters outside her house was carrying an ‘antisemitic’ sign that read, “Jewish Leaders John 7:1“.

John 7:1 reads, “After this, Jesus went around in Galilee. He did not want to go about in Judea because the Jewish leaders there were looking for a way to kill him.”

Apparently, some of the good Christian people of Ohio still take the warnings of Christ seriously — perhaps the Jewish Actons should not be trusted to have our best interests at heart.

With every passing year, more and more Jews hold key positions of power in all levels of government, despite Christ’s admonitions.

During the Byzantine Empire, for example, Jews were banned from holding any public offices, or from even teaching Christian children — which explains how that empire lasted over 1,000 years, and why it’s never taught in schools.

When we ignore the words of Christ, we inevitably will be ruled over by the Amy Acton’s of the world.

Those that refuse to insist on having Christian leaders will inevitably to ruled over by anti-Christ Jews.