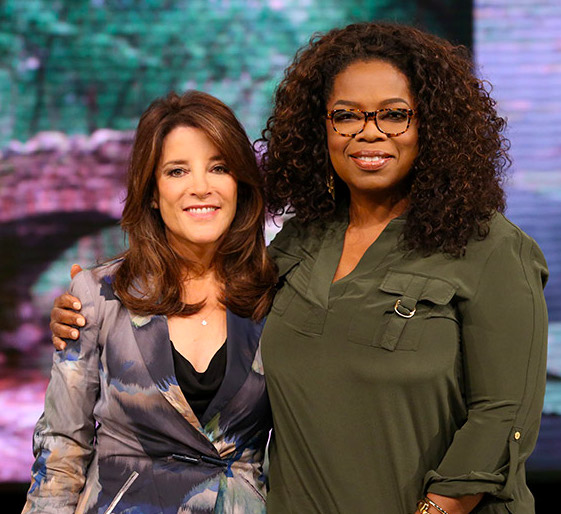 Marianne Williamson, a jewish “spiritual guru” and mega-millionaire of the New Age Movement, announced her candidacy for the Democratic presidential nomination to a crowd of supporters gathered in the Saban Theatre in Beverly Hills:

Standing in front of an enormous American flag, Williamson gave a forty-minute, emotionally-charged speech. Besides her gathered supporters in the 2,500 seat arena, roughly 3,300 viewers watched the speech via live streaming.

Speaking without notes or apparently any teleprompter, Williamson spoke extensively about her parents and the inspirational advice she received from them.

“My father never let us forget to really see. He would always say don’t just look, really see,” she said.

Best known for her bestselling books, especially A Return to Love, and frequent appearances on the Oprah Winfrey Show, the political message of candidate Marianne Williamson is as unconventional as her background.

Very little of her speech centered on specific policies. She was highly critical of the thinking of Milton Freeman and the Chicago School of Economics, describing its impact on America as “devastating.”

“Something began to change when the entire society began to be propagandized about this ‘trickle-down economics.’”

The only specific policy outlined in the speech was a plan for the federal government to pay reparations for slavery. She is proposing $100 billion be paid to African-American leaders over ten years, to be distributed to educational and economic projects.

Although yesterday’s speech was light on policy detail, she did announce the launch of her campaign website marianne2020.com. It is already populated with an extensive policy program (including the plan for paying reparations).

…Williamson acknowledged that the field of candidates vying for the Democratic nomination is crowded, but expressed confidence about the campaign’s chances

The New Age Movement in America has been crawling with Jews from its very beginnings — with Jews such as Helen Schucman, Marianne Williamson’s jewish mentor who wrote A Course In Miracles which she claimed to have transcribed from her personal meetings with Jesus.  Williamson freely admits that she is still a “practicing Jew” who could have very well become a rabbi at one point in her life.  Her vague New Age approach targets those who claim to be “spiritual but not religious.”

The cornerstone of her campaign and “spiritual healing” program for America is a multi-billion dollar pay out to Blacks in America for slavery reparations.  She doesn’t explain exactly how giving Blacks a pile of money with no strings attached is going to turn them into respectable citizens, but when you float around the the spiritual ether, you’re not really expected to have practical answers in the hear and now.  But then again, Jews have politically controlled Blacks in America by promising them free stuff, and Williamson seems to be another in a long line of their jewish slave masters.