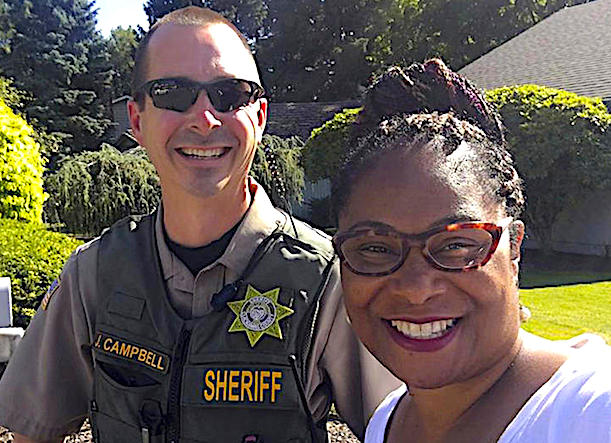 Almost a year after Oregon state Rep. Janelle Bynum’s story of being questioned by police after a 911 call on her as she campaigned in her district went viral and sparked the hashtag #CampaigningWhileBlack, Oregon state senators have passed a bill that would allow the victims of frivolous, discriminatory 911 calls to sue the callers:

On Monday, the Oregon state Senate passed House bill 3216, a measure introduced by the state’s three black Democratic legislators, including Bynum. The bill allows victims of these calls to sue a 911 caller for as much as $250 if the victim can prove that the 911 call was racially motivated and that the caller intended to discriminate or harm the reputation of the victim.

The legislation was overwhelmingly supported by state lawmakers of both parties, but it was deeply personal for Bynum, the only black legislator in the Oregon House (the other two black legislators serve in the state Senate.)

”When someone gets the police called on them for just existing in public, it sends a message that you don’t belong here,” Bynum told the Associated Press on Monday. “This creates a legal pathway to justice.”

The bill, which passed the Oregon House in April, will return to that chamber to resolve a minor discrepancy. If the new version of the bill is approved, the measure will be sent to the desk of Gov. Kate Brown, a Democrat.

The bill comes as legislators in several cities and states are debating how to best respond to unnecessary 911 calls on black residents after a number of high-profile “Living While Black” incidents have gone viral.

“Living While Black” stories have dominated headlines for months. Legislators hope bills like Oregon’s can help put an end to them.

…Still, the proposals have been criticized by some who are concerned that making it easier to fine and sue people for making racist 911 calls will frighten people from calling 911 when they really need help.

Oregon state Sen. Alan Olsen, a Republican, voted against the proposed 911 measure on Monday, saying that the bill would make “our communities less safe.” Other critics have argued that existing laws that punish people for filing false police reports make these new proposals about 911 calls redundant.

Supporters of the Oregon legislation and similar measures in other states counter that it is necessary to acknowledge just how serious an unnecessary 911 call can be.

Just like many Jews believe that White people are antisemitic for no reason other than they just hate Jews, Blacks too have internalized this victim mentality and seem to believe that White people are racist just because they hate Black people for no other reason than they are Black.  And now the State of Oregon is legalizing this Black delusion that the only reason a White person would call 911 on them is because they are racist.  And the last thing Blacks need right now are more justifications to criminally victimize their White “oppressors”.  This will not end well for them.

How exactly could Blacks even determine in court whether a 911 call was motivated by “racism” rather than a legitimate concern that a crime was being perpetrated?  Per capita, Blacks are involved in all manner of criminal activity far beyond what their population numbers would predict, and if Blacks don’t wish to be “profiled”, then perhaps they should collectively clean up their act and stop engaging in antisocial behaviors that confirm in the minds of everyone that the racial ‘stereotypes’ of Black criminality are indeed based in reality.  But personal accountability is not a stereotype that we unfortunately associate with Blacks.