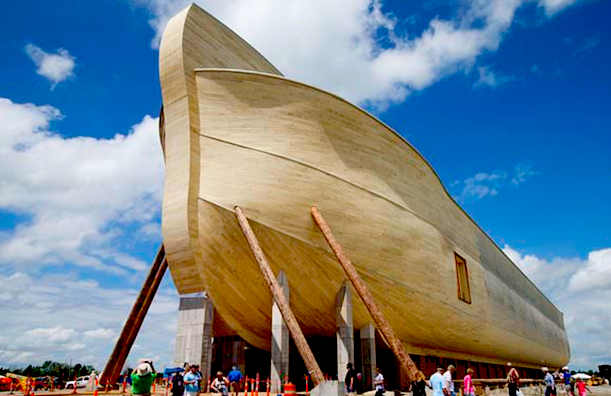 Owners of the Ark Encounter,  a Noah’s Ark theme park in Kentucky, say excessive rain in 2017 and 2018 caused nearly $1 million of damage after a landslide on an access road, and are suing its insurers who refused to cover damages caused by the deluge:

And their federal lawsuit is demanding that their insurance companies, including Allied World Assurance Co. Holdings of Switzerland, cover the cost.

The insurance carriers refused to cover any of the damage costs, arguing that ‘faulty design or workmanship’ on the road is not covered by the owners’ policy, according to the suit.

Ark Encounter’s complaint says the insurer later agreed to pay a fraction of the cost that it said was covered by the policy.

Ark Encounter in Williamstown, Kentucky, is based around a 510-foot-long wooden ark – intended to be a replica of the biblical Noah’s Ark.

In the famous Christian story, God sent a worldwide flood to destroy all living creatures except for the ones which were taken two-by-two onto a giant ark.

The $102 million replica ark took six years to build and is one of the largest timber-framed buildings in the world.

Opened in 2016, it features an animatronic Noah and lifelike models of animals including bears, giraffes and even dinosaurs.

It was constructed using 3.3 million feet of wooden boards, and funded by donations, junk bonds and tax rebates from the state.

The ark was built by Answers in Genesis, a fundamentalist Christian organization headed by Creationist Ken Ham.

We won’t quibble over the fact that Noah was pre-Christian, not “Christian” as stated in this story.  Nor will we quibble over whether or not the flood was “worldwide” or just among the lands where the Genesis 10 nations dwelled.  Nor will we quibble over the assertion that the purpose of the flood was to destroy “all living creatures” which were not on the Ark. Nor will we express our dismay that the amusement park depicts Noah and his family as dark-skinned Middle Eastern types who descended from Ishmail who hadn’t even been born at that time (see photo below).

What we can say, however, is that this insurance dispute provides the jewish-controlled mainstream press with yet another “reason” to hold Christians up to public ridicule and contempt while at the same time making “evolution” seem a more credible alternative.  While this extravagant theme park may seem to be a good way of getting Christian children interested in the story of Noah, what it fails to do is sufficiently explain why Noah and his family in particular were chosen to be saved to repopulate the “world”, or how the multi-racial world population as we see it today could possibly have come out of this one family’s DNA.  And without persuasive answers to these fundamental points, this media story certainly will succeed in turning more people away from the Bible. 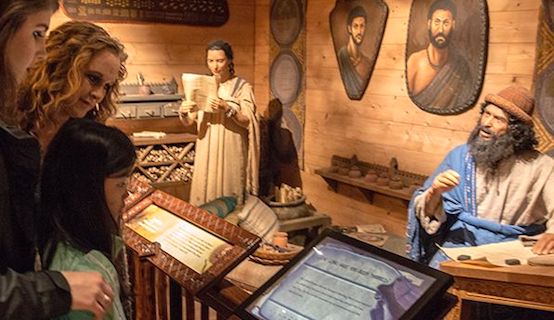