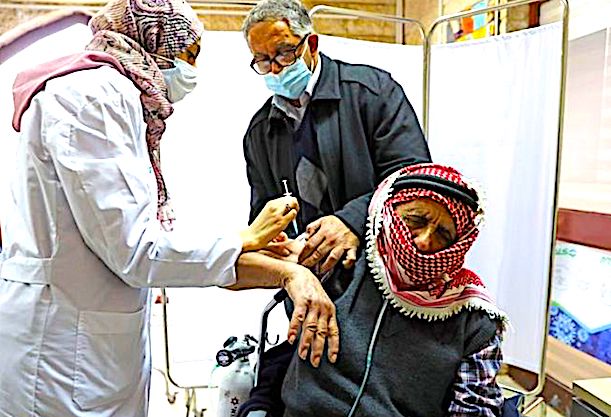 Despite the heavy promotion of the COVID vaccination in the Israeli media, the Palestinians in East Jerusalem have all but ignored it — convinced that the vaccines will be used as part of the decades-long, ongoing effort to ethnically cleanse Jerusalem — and all of eretz Israel — of its Palestinian population:

The least crowded coronavirus vaccination center in Israel might be in East Jerusalem’s Beit Hanina neighborhood. On Tuesday morning, the brand-new clinic opened for business but it was nearly empty, bereft of people waiting to be immunized….

Only 20 percent of Palestinian East Jerusalem residents over the age of 60 have been vaccinated, compared to about 75 percent of Jews over 60 in the city as a whole, according to a Home Front Command assessment published in the Haaretz daily Tuesday.

“I expected there to be hesitancy among East Jerusalem residents, but not to this extent. Not to the degree that the vast majority of people are not being vaccinated,” said Fouad Abu Hamid, who directs a Clalit clinic in Beit Safafa, an Arab neighborhood that is mostly in East Jerusalem.

East Jerusalem residents constitute around 38 percent of the capital’s population. They do not possess Israeli citizenship but are covered by any of Israel’s four health management organizations. The vast majority — around 70% — are registered in Clalit, Israel’s largest provider.

Daana estimated that the small center had the capacity to provide around 100 vaccinations a day or more, assuming people started showing up. Only one or two trickled in for vaccination appointments during the half-hour The Times of Israel stayed to watch, however.

“We’re not so optimistic. They’ve tried to make phone calls and get people to show up and be vaccinated, but there was little response. People are still scared,” said Sheikh Jarrah clinic director Dima Bitar, a member of Clalit’s Jerusalem coronavirus command center…

Everyone offers different explanations for the low demand for the shot, but most officials agree that unfounded rumors and conspiratorial thinking have taken hold among some East Jerusalem Palestinians. The phenomenon is far from unique to Palestinians; worries about the safety of the vaccine persist worldwide despite public health officials’ best attempts to allay them…

Fear about the vaccine’s long-term effects can range from the mild to the extreme, according to Bitar.

“Many are telling one another conspiracy theories: they want to kill us, they want to sterilize us, this will distort our genetic sequences. I’ve been getting some very strange questions. I even have employees here, in this clinic, convincing one another not to get vaccinated,” she said…

“Far more Jews are coming than Arabs. It’s hard to say for sure, and the number has been improving over the past two to three days. It was extremely low, but now it’s closer to maybe 20 percent,” said clinic director Bitar…

The Israeli Health Ministry did not respond to a request for hard numbers on the number of vaccinations given in East Jerusalem clinics to Palestinian residents versus Jewish citizens.

A number of factors complicate the picture. The Arab population is younger than its Jewish counterpart and therefore less likely to be eligible for the vaccine, although East Jerusalem Palestinians are more likely to have preexisting conditions that make them eligible.

Tens of thousands of East Jerusalem Palestinians also live beyond the security barrier that snakes through the eastern half of the city, cutting off whole neighborhoods. Those who live on the other side must cross through the infamous Qalandiya checkpoint in order to be vaccinated…

But most officials — including Palestinians — repeatedly emphasized that they view the key problem as one of willingness, not merely one of access. Conspiratorial thinking about the virus, spread on social media, has penetrated deep into East Jerusalem…

Kareem, a resident of Beit Hanina, said he was not sure whether or not he wanted to be vaccinated.

“I’ve heard a lot about it, how it can attack your kidneys or your brain. Sure, they say it’s safe, but I don’t really believe it. How do they know what will happen a year from now?” he told The Times of Israel outside of Beit Hanina’s Baladi Mall…

Considering that Israel has admitted that they secretly sterilized thousands of Ethiopian women under the pretext of a beneficial vaccination program, the Palestinians would be absolutely insane to truth them with this highly controversial COVID vaccine that has already killed at least one Israeli who was foolish enough to take it.

It’s no secret that many Israelis want all Palestinians to be removed from all of Jerusalem — as they consider the city to be the true capital of the “Jewish” state.

Their long-term goal is to completely ethnically cleanse the Palestinians from Jerusalem — remove the Al Aqsa Mosque from the Temple Mount — and then build the Third Temple and usher in their “moshiach”.

And killing a few Palestinians each week with cluster bombs for throwing rocks at their tanks isn’t culling the population fast enough — and it would seem that a “voluntary” vaccination program could speed it up dramatically.

Considering the Israelis now have the means, motive, and opportunity — with the fake COVID pandemic — the Palestinians are completely rational to suspect that the Israelis just might not have their best interests at heart.

Now Amnesty International is trying to make the vaccine seem more appealing by making the spurious claim that Israel is intentionally withholding the “beneficial” vaccine from the Palestinians — but the reality is that the Palestinians don’t want any part of its “benefits”.