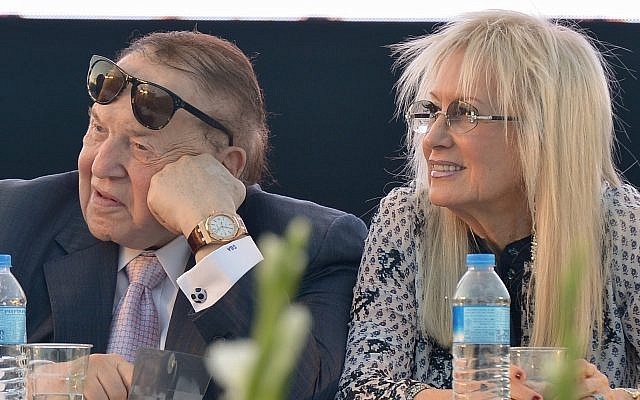 The White House on Saturday announced upcoming recipients of the Presidential Medal of Freedom, the highest civilian honor awarded in the US, and among the recipients is Miriam Adelson, wife of business magnate and Trump backer Sheldon Adelson:

“Adelson is a committed doctor, philanthropist, and humanitarian,” the White house announcement said. “She has practiced internal and emergency medicine, studied and specialized in the disease of narcotic addiction, and founded two research centers committed to fighting substance abuse.

“With her husband, Sheldon, she also established the Adelson Medical Research Foundation, which supports research to prevent, reduce, or eliminate disabling and life-threatening illness.”

In addition, “As a committed member of the American Jewish community, she has supported Jewish schools, Holocaust memorial organizations, Friends of the Israel Defense Forces, and Birthright Israel, among other causes.”

The Adelsons have made numerous and significant contributions to Trump and to Republicans. CNN noted that in the recent midterm elections the couple donated at least $112 million to Republican candidates.

The Presidential Medal of Freedom is given to “individuals who have made especially meritorious contributions to the security or national interests of the United States, to world peace, or to cultural or other significant public or private endeavors.”

Six other people, alive and dead, will receive the top medal at a November 16 ceremony.

The three posthumous recipients are singer Elvis Presley, who “defined American culture to billions of adoring fans around the world”; baseball player Babe Ruth, whose “legacy has never been eclipsed” and who “remains the personification of ‘America’s Pastime’”; and supreme court justice Antonin Scalia, who “was one of the greatest Supreme Court justices in American history” and who ‘never backed down from the bedrock proposition that the Constitution “means and will always mean what it meant when it was adopted.’”

Also receiving the award are Senator Orrin Hatch, who “has championed religious liberty, fought against communism, and stood on the side of freedom around the world”; Justice Alan Page, a former associate justice of the Minnesota Supreme Court and professional football player, “an accomplished jurist, athlete, and philanthropist”; and Roger Staubach, a former hall-of-fame quarterback, “a successful businessman and a champion for many charitable causes.”

What do Babe Ruth, Elvis Preseley and Miriam Adelson have in common?

Nothing. But let’s all pretend that they do just so Donald Trump can pay back his largest financial backer for helping him get elected.  And Trump will stay in office only as long as he continues to please his overlord, Sheldon Adelson.  And while this blatant pandering should embarrass all those concerned, we are not talking about normal people here — their egos and self-importance know no bounds.

Miriam Adelson supports many “humanitarian” causes but only as long as those causes are jewish and pro-zionist.  What those jewish causes have to do with “freedom” or even “America” is anyone’s guess, but to ask these questions is “antisemitic”.  Jews love to give and accept awards because it provides great P.R. for their nation-wrecking behavior and agenda.