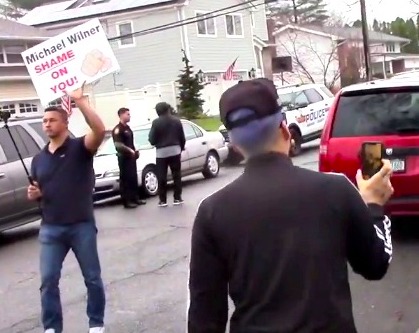 A New York City Council member on Tuesday charged a community group in the borough of Queens with having carried out “a grotesque act of antisemitism” when its supporters demonstrated next to the Long Island synagogue of a real estate developer with whom they are in conflict:

“Protesting outside a person’s synagogue on the Sabbath because they might not develop their private property the way you want is a grotesque act of antisemitism and fully deserves our unqualified condemnation,” Rory Lancman — a member for the 24th District of the New York City Council — declared in a statement.

Lancman was referring to an impromptu rally organized during Shabbat services last Saturday by a local activist group, the “Glendale Middle Village Coalition,” outside Temple Or Elohim in Long Island — where realtor Michael Wilner serves as president.

The group is opposed Wilner’s plan to establish a homeless shelter at a former factory in the Queens neighborhood, and have called on him to build a school instead.

Lancman said that the Glendale Middle Village Coalition members “should be ashamed of themselves, and should apologize for their repugnant conduct.”

According to a report in local news outlet QNS.com, protesters had initially gathered outside Wilner’s home in Jericho, Long Island, on Saturday morning. After they discovered the house was empty, they marched to Wilner’s synagogue chanting, “Michael Wilner shame on you, let us build our school.”

When the demonstrators arrived at the synagogue, cantor David Katz rushed outside to confront them.

“I’m livid and I can’t believe they would come to a place of worship to protest someone who is a member here. It has nothing to do with the temple,” Katz said.

No doubt many lucrative business deals have been consummated at synagogues all over the world, especially hush-hush sweetheart deals that adversely affect the quality of life in many communities.  When a jewish real estate developer wants to make money off of converting an abandoned factory into a homeless shelter right in the middle of a quiet community, he should rightly expect some blowback, even when he’s “praying” for the success of that deal at his synagogue.

And as these protesters are finding out, if you criticize a Jew who happens to be attending synagogue, you will be smeared as a “grotesque antisemite”, a phrase that Jews usually reserve for the likes of Adolf Hitler and Jesus Christ.  If people have a problem with you destroying their neighborhoods by opening a homeless shelter, which will be a magnet for drug users, street criminals, and the mentally ill, all you need to do is accuse them of hating Jews instead of hating homeless shelters, and chances are, your  opposition will be silenced, and your project will succeed.